While the name Ferdinand Scheeler isn't known to many architects outside Chicago, his resume is extremely well known. During his 37-year tenure at SOM, Ferd — as his friends and family called him — worked on the Air Force Academy Chapel in Colorado and Chicago's John Hancock and Sears Towers, among many other buildings. But it was his quiet and gentle demeanor — qualities mentioned in both the Sun-Times and Tribune obituaries — that kept fame at bay, even though his technical role in those projects is as important as the design contributions of Bruce Graham and other SOM partners.

After Ferd was laid off around 1990 he went to work for Jim DeStefano. It's in this capacity that I knew Ferd. Like most people who knew him, I will always remember him smoking a pipe, in the office or outside on the front stoop in later years. He was a very quiet person but he also had a great sense of humor and was easily approachable, always ready to answer those tough technical questions that nobody else could tackle. He also had a desk that only he could maneuver, with papers piled head high and every inch of his office covered with some sort of document. 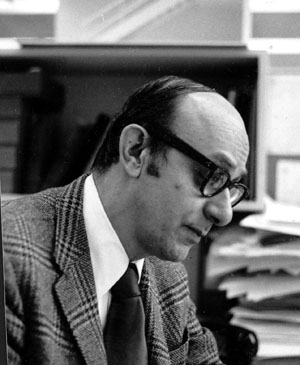 Ferd back in the day.

Ferd retired about ten years later and became seriously ill a couple years ago. He passed away on Thursday, April 27 in his Elmhurst home from complications to leukemia. He is survived by his wife Nancy, his daughter Caroline Scheeler-Vajarski, and five grandchildren. Check out the obituaries linked above for information on Ferd's upbringing and his tenure at SOM.
Email Post