Flipping through October's Architectural Digest, "The Architecture Issue," a couple advertisements stood out, each using architecture and architects to sell cars.

The first is a two-page spread for Lexus, its HS Hybrid sitting in front of a Richard Meier sketch of his "much-anticipated Italcementi Innovation and Technology Central Laboratory" in northern Italy. The fairly ho-hum sketch is accompanied by text that boasts the lab "will be built of TX Active concrete that will 'eat' smog and significantly reduce pollution caused by car emissions and industrial activities." Not surprisingly the pollution-mitigating cement was developed by Italcementi and tried out on Meier's Jubilee Church in Rome. The ad's text further states that the other features of Meier's building (insulated low-e glass, geothermal, solar energy systems) will supposedly "provide close to total energy self-sufficiency." 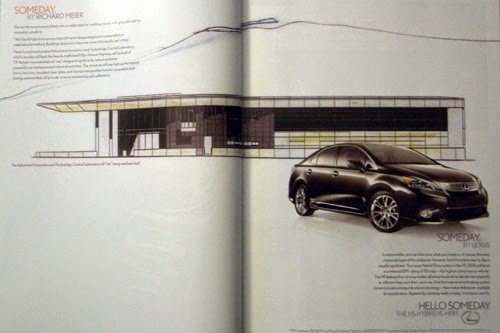 The second ad is one of those "special advertising sections" laid out like a magazine feature, fooling us into reading the content as if it didn't exist solely to sell a product. Across four pages the reader is shown the winners of Maserati's 2009 "nationwide call for entries of garages in which a Maserati might feel at home." Most of the photos are of the existing garage winner, Holger Schubert of Archisis (the other winner, in the conceptual category is shown in the gray box at bottom right). The 1,200sf (111sm) garage is the first of five for the L.A. architect's canyonside residence; it literally looks like a home for the car. A bridge gives access to the glass-walled garage. Features inside include radiant concrete floors, mechanically operated window screens, a library with homasote walls, some designer furniture and a ramp that raises six inches to allow Schubert to pull out of the garage without starting the engine. The top-right image shows that not only does the architect give the car a view he also gives onlookers a view of his car. 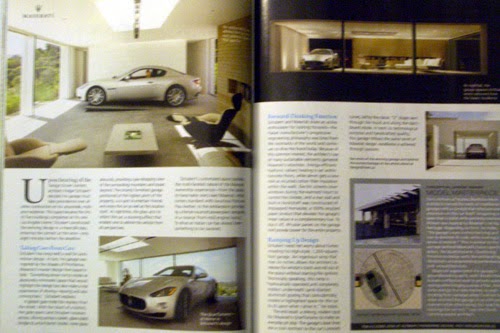 That architecture and architects are being used to sell cars does not surprise me; it is something I documented in 2005. Nor am I taken aback that it is done in these manners. Design and its relationships to the environment, in the first case, and luxury, in the second, are shared by both the building and car industries. And, while further differences between the two ads include the celebrity stature of one architect and the relative lack of name recognition of the other, they share a certain optimism about the future of architecture and cars. Sustainability, creativity and a drive (pardon the pun) to improve our situation links these two realms. Now if only architects could be paired up in advertising with bicycles or public transportation.
Email Post
Labels: arch-advertising