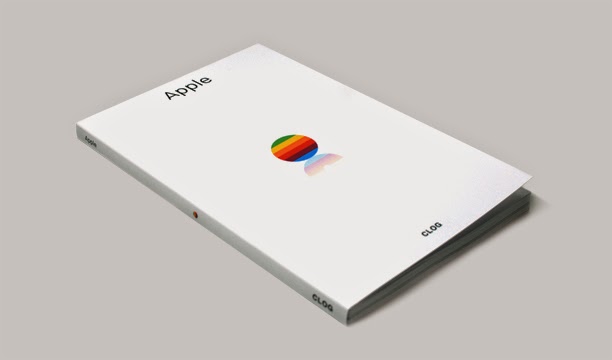 The first issue of CLOG focused on BIG, exploring the firm, its designs, and its main personality across about 50 contributions, including some responses from Bjarke Ingels himself. The second installment of the periodical that "explores, from multiple viewpoints and through a variety of means, a single subject particularly relevant to architecture now" takes aim at Apple, spurred by the June 7, 2011 presentation by Steve Jobs to the Cupertino City Council for "Apple Campus 2." Not surprisingly, renderings of the spaceship-like design were everywhere last summer, one of those rare moments when architecture takes center stage in popular media. But the 40-odd contributions to CLOG do not limit themselves to discussing the Norman Foster-designed project; there is plenty in Apple's oeuvre -- computers, devices, stores, etc. -- to shine a light on.

Like the first issue of CLOG this one is aided by a recognizable flow to the short pieces, such that related takes are placed adjacent to each other. It starts with the suburban house and garage where Jobs lived and started Apple with Steve Wozniak and Ronald Wayne (the last is interviewed by CLOG, one of the last pieces in the issue), and then moves on to Apple Stores (360 and counting), the design of devices, glass in the design of stores like the Apple Cube, the Cupertino campus, and finally the death of Steve Jobs. The majority of the issue is about the campus, both in essays and in graphic documentation. Some of the latter include helpful diagrams that compare the ring of the building with structures like the Olympic Stadium in Beijing, the World Trade Center site, and the Great Pyramid of Giza -- all fit within the landscaped center.

Other highlights include graphic depictions of the various stores inserted into malls, the patent Apple pulled for the design of their Upper West Side store, the various takes on glass (such an important element in their stores, devices, and eventually the campus), the one-sentence responses by well-known architects to CLOG's question on the campus's design, and various replies to CLOG editor Kyle May's emails to various stakeholders on the Cupertino project (it goes without saying that no help is offered). Not all of the contributors are so smitten as everybody (in the world) seems to be with Apple in its various design guises, so it's refreshing to get some criticism about the supposed originality of their campus architecture, the questionable practice of recycling batteries and other electronics by Apple, and the effects of glass facades on birds, among other short stabs.

From the first to second issue CLOG departed from an office/personality popular in architectural circles to a subject known and embraced by millions of people around the world. An unwitting layperson may be put off by some of the more theoretical arguments in the issue, but there is still plenty of accessible writing and enticing imagery to open it to a larger audience. There is an apparent momentum from the first issue that is part publicity and part being the right idea at the right time: people still want print publications and the single topic format in short bites works in a world with digital distractions. We'll see if that momentum holds with the third issue on Data Centers, a step towards the digital realm but away from the striking architecture of the first two issues.