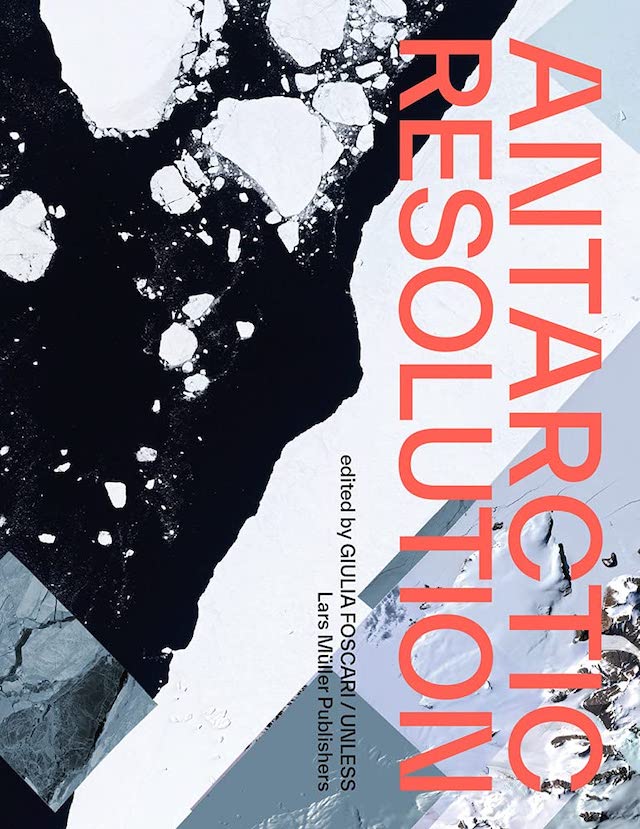 PUBLISHER'S DESCRIPTION:
Accounting for approximately 10 % of the land mass of Planet Earth, the Antarctic is a Global Commons we collectively neglect. Far from being a pristine natural landscape, the continent is a contested territory which conceals resources that might prove irresistible in a world with an ever-increasing population. The 26 quadrillion tons of ice accumulated on its bedrock, equivalent to around 70 % of the fresh water on our planet, represent the most significant repository of scientific data available. It provides crucial information for future environmental policies, and, at the same time, is the greatest possible menace to global coastal settlements when sea levels rise because of global warming.
On the 200th anniversary of the discovery of Antarctica, Antarctic Resolution offers a high-resolution image of this hyper-surveilled yet neglected continent. In contrast to the fragmented view offered by Big Data companies, the book is a holistic study of the continent’s unique geography, unparalleled scientific potential, contemporary geopolitical significance, experimental governance system, and extreme inhabitation model. A transnational network of multidisciplinary polar experts – represented in the form of authored texts, photographic essays, and data-based visual portfolios – reveals the intricate web of growing economic and strategic interests, tensions, and international rivalries, which are normally enveloped in darkness, as is the continent for six months of the year.
Giulia Foscari is an architect, researcher and writer who has been practising in Europe, Asia and the Americas. She is the founder of UNA, an architecture studio focussed on cultural projects, and of its alter ego UNLESS, a non-profit agency for change that brings together interdisciplinary experts to conduct research on extreme environments threatened by the planetary crisis.
REFERRAL LINKS:

dDAB COMMENTARY:
A few days ago I watched an episode of Smithsonian Channel's How Did They Built That?, an episode that happened to include Hugh Broughton Architects' Halley VI British Antarctic Research Station. I had already seen other episodes in the series and was not impressed with the style of the show — an adrenaline-laden mix of dramatic music and narration interspersed with soundbites by a handful of engineers and other experts — but the "Arctic Modules & Auditoria" episode was irresistible. Halley VI has gotten a fair amount of attention since it was completed in 2013, understandably so, with its blue and red modules lifted on hydraulic legs, looking like the realization, finally, of Archigram's Walking City, but on a icy continent most humans will never visit instead of in an ocean or in the East River next to the United Nations. Even with all the attention, I was still curious to see footage revealing how it was built — how construction materials were delivered to Antarctica then put together, finished out, and lived in — as well as how the eight modules were pulled many miles inland just three years later, after cracks on the ice sheet it sat upon developed.
If How Did They Built That? answered my questions about this one notable work of architecture occupying a tiny part of the sparsely populated southernmost continent, Antarctic Resolution answered every question I didn't know I had about Antarctica. At nearly 1,000 pages, and with too many contributors to count — "a transnational team of specialists from the fields of aeronautics, anthropology, architecture, biology, chemistry, climate change, economics, engineering, geoscience, glaciology, history, law, literature, logistics, medicine, physics, political science, science, sociology, technology, and visual arts," per Giulia Foscari — the book is an exhaustive portrait of the seventh continent and accounts of people exploring it and building upon its surface. Structured as contributions from the specialists (in black) presented in parallel with charts, maps, and other unmediated collections of data (in orange) articulated by Foscari and UNLESS, the book — truly a tome — is an impressive document following years of research and academic workshops and seminars. Although Antarctic Resolution is also an exhibit at this year's Venice Architecture Biennale, the fact that the display there is basically the book itself — detached from its spine, spread across a long table, and accompanied by a few artifacts — makes it clear the goal of the research and contributions was a book, this book.
Before Antarctic Resolution, Giulia Foscari and Lars Müller put out Elements of Venice, which paralleled another Venice Architecture Biennale: Fundamentals, the 2014 exhibition curated by Rem Koolhaas. I don't have that earlier book (it's now out-of-print and fetching for some ridiculous sums), but I have the companion Elements of Venice map from the Biennale that highlights buildings and spaces in bright orange across the urban fabric of Venice. That same reliance on fluorescent orange continues with Antarctic Resolution, usually for the best, as in the definition of the parallel strands of information mentioned above, but sometimes at the detriment of legibility or as an unnecessary distraction. Orange text on white background is alright under the right lighting conditions, but even a bright lamp couldn't make the occasional orange-on-silver sections of text readable. And the spreads that focus on chronological presentations of photographs (see the second-to-last spread, below) have horizontal and diagonal orange lines that lead the eye properly across the pages but also detract from the process of digesting the words and images. The rest of the book — 99.99% of it — is beautifully and capably laid out and designed, with drawings, for example, consistently drawn in terms of lines, text sizes, and colors.
The essays are structured into three large sections ("Dominance or Research," "Four Elements," and "Surviving in the Cryosphere") that are further broken down into chapters, sixteen of them overall. Photo essays conclude each of the book's five sections, which also consist of an "Archive of Antarctic Architecture" and the "Appendix" (oddly, for such a tome, no index is included). Architects will be most interested in the Cryosphere and Archive sections; the former examines how people have managed to physically survive and socially thrive on a continent that is uninhabitable much of the year, while the latter presents dozens of structures that have been built on Antarctica from 1899 to the present, as well as some future proposals. Halley VI is found in the chronological Archive (Hugh Broughton also contributed two essays in the previous section), but so are Halley I (1957), Halley II (1967), Halley III (1973), Halley IV (1983), and Halley V (1992). By the time readers reach Halley VI — even if it's a slow flip through the book, accompanied by stopping points to digest certain parts, as this reviewer did — they should have gained an appreciation for Antarctica and the many facets that have shaped it into a truly "Global Commons," as Foscari describes it, and perhaps the most important land mass for understanding the past, present, and future of our rapidly warming planet.
SPREADS: 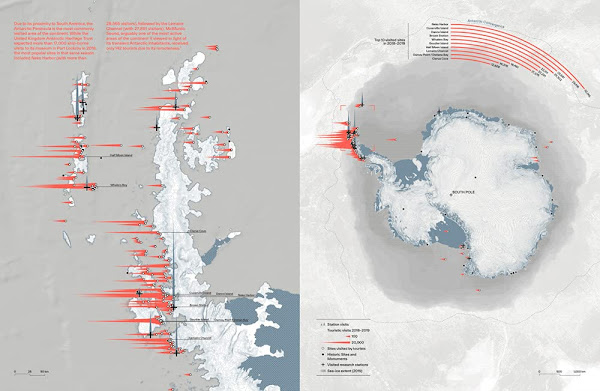 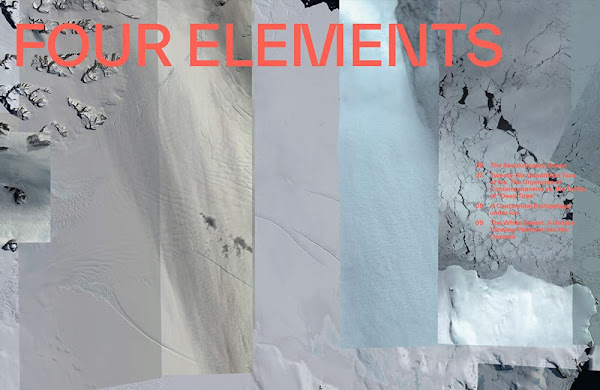 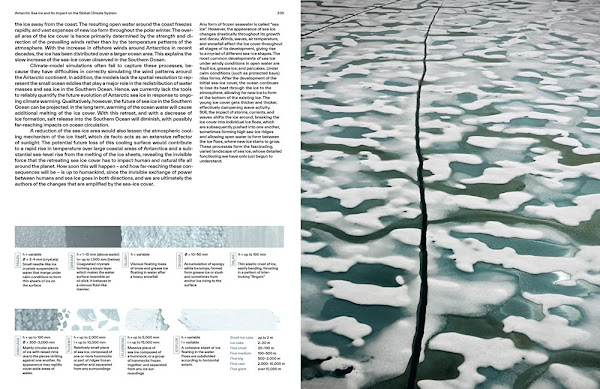 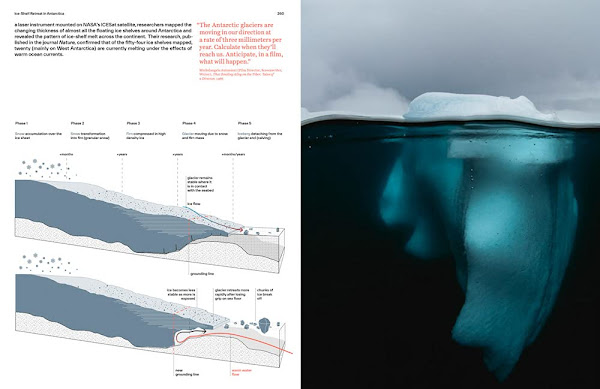 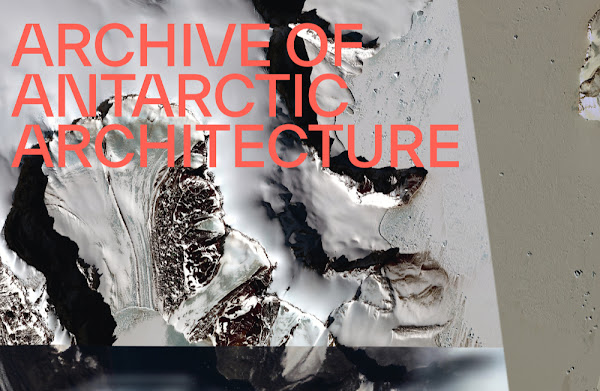 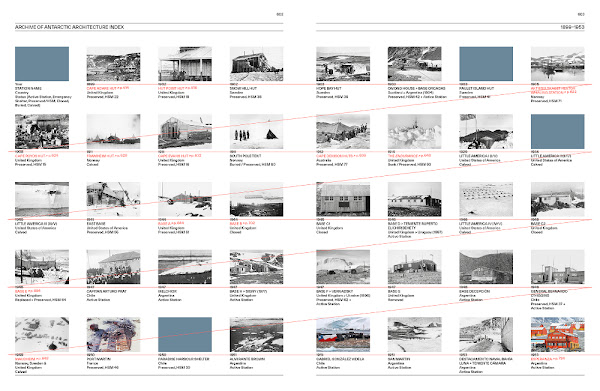 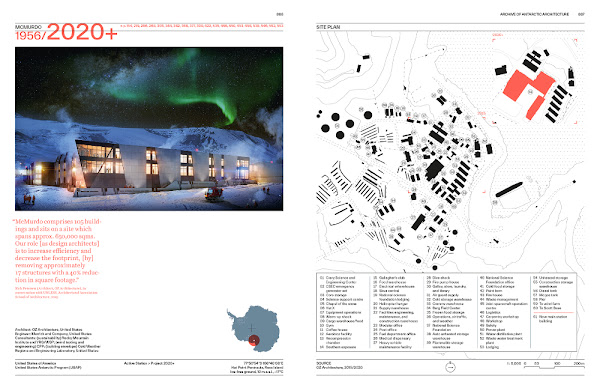