Kimbell Art Museum in Fort Worth, Texas by Louis I. Kahn, 1972


Space is not a space unless you can see the evidence of how it was made. -Louis I. Kahn

Louis Kahn's client, for what was to become his most famous commission, asked for a museum with a human scale and galleries with natural light. Kahn surpassed these conditions, creating his greatest built representation of the ideas he was constantly developing and reevaluating throughout his career, mainly shaping space through the unification of light and structure. 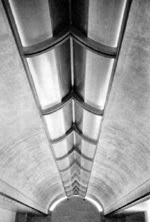 A simple composition of parallel concrete vaults, the Kimbell Art Museum (1966-72) reveals itself to the visitor before stepping inside the building, with the porticoes that seem to be a superfluous continuation of the building's vaulting. The unnecessary porches (as referred to by Kahn) define the structural vocabulary of the whole museum: basically a concrete beam (100' x 23') in the shape of a cycloidal vault, supported by four square columns. This simple structure is used, as was the case in most of Kahn's buildings, to create an abstract order, a genesis for creating more complex space. The gallery spaces are not confined by the individual vaults but flow from one to another; the low "servant" spaces between vaults helping to define smaller, human-scale rooms.


Structure is the maker of light, because structure releases the space between and that is light giving.  -Louis I. Kahn 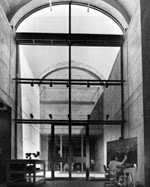 This flow is achieved through the freeing of wall space that Kahn refers to at left, apparent in the exterior porticoes. The creation of space on the interior through light, though, is achieved through a freeing of roof space, not wall space. In what has become Kahn's most popular element, light diffusers spread natural light from a narrow slot to the sky along the undersides of the concrete vault. Casting an even glow throughout the museum the diffusers shield the Kimbell's work from the strong Texas sunlight but also to help indicate the time of day. Or so Kahn thought. The even glow does not help to relate to exterior circumstances so much as the three courtyards that Kahn created by slicing the vaults in particular places. These courtyards bring in a piece of the outside world, located at the most interior portions of the galleries.

The Kimbell Art Museum illustrates the changing ideas that shaped Kahn's buildings, from the "served and servant" focus of his earlier buildings to his enigmatic dictum of "silence and light" near the end of his career. The tension that existed between his strong practicality and his spiritual view of architecture reached a fulfilling synthesis at the Kimbell.
Email Post
Labels: weekly dose