Architecture only survives where it negates the form that society expects of it.Where it negates itself by transgressing the limits that history has set for it.   -Bernard Tschumi 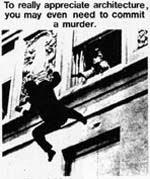 Bernard Tschumi's theories on architecture, developed in the 1970's through gallery installations, texts and "advertisements" (left) focused on contemporary society's disjunction between use, form and social values, rendering any relationship between the three to be both impossible and obsolete. His thoughts on disjunction led to the design of the Parc de la Villette in Paris, in which he won a competition for construction in 1983. The Parc consists of 35 red follies, sport and recreation areas, playgrounds, a science and technology museum, and a music center. Tschumi was in charge of planning, in addition to the design of the follies, and superimposed three ordering systems: the points of the follies, the lines of the paths, and the planes of the sport areas. This network questions the order that is inherent to architecture with a superimposition that attempts to bring together three non-related systems. The process and arbitrary result ignore the basic tenets of architecture throughout history-composition, hierarchy and order. Each follie is based on a cube and deconstructed, according to rules of transformation (repetition, distortion, superimposition, interruption and fragmentation), without any functional considerations.

The grid of red follies create reference points and are non-contextual in their form and color, in favor of an intertextuality that leads to a dissolving of a priori meanings. The forms of the follies become signifiers as opposed to signified (which carries meaning) in order to mean nothing. The process of shaping the follies, and the ideas extrinsic to them, represents a conscious reaction to multiple meanings associated with Jaques Derrida's philosophy of Deconstruction. It is futile to attempt a summation of Derrida's philosophy, but this text defines it as the impossibility of one meaning in a text, or language in general, due to a deconstruction of language to its foundation, where multiple meanings can be found. Unlike many of his contemporaries, though, Tschumi's references to Deconstruction take place at more than a formal level. Although the follies are physically deconstructed, their intended lack of meaning relates his use of the philosophy to its essence, not stylistic applications.


Derrida...asked me why architects should be interested in his work, since, he observed, "deconstruction is anti-form, anti-hierarchy, anti-structure-the opposite of all that architecture stands for." "Precisely for this reason," was my response.   -Bernard Tschumi 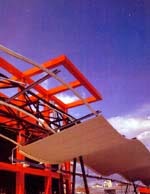 The assertion that the follies lack any historical precedent is important to the idea of "non-meaning" and valid in terms of classical styles and their parts (columns, arches and so forth). When looked at in relation to Constructivist architecture, though, the follies have a definite influence in the formal characteristics of the Russian movement earlier in the century. The similarities are evident in the drawing style and form, as well as the use of structure, evident in his sketch at left with its similarities to Chernikov's drawings from the early 20th Century. The influence of the Constructivists is apparent in the formal qualities of the Parc and Tschumi's desire to upset the traditional aspects of architecture, though he is never explicit of this influence. Instead he relates his work to French philosophers; such as Bataille, Foucault, Baudrillard and, as mentioned, Jaques Derrida.

It is through these and other sources (mainly philosophic, literary and cinematic) that Tschumi witnesses a disjunction between architectural space and the events taking place within them. This realization, coupled with his belief that architecture should import from other fields of culture in order to influence society, has contributed to an architecture that responds to the disjointed nature of the contemporary world to upset the conventions that have been passed down through history.