The theater, in which the architecture serves as a possible background, a setting, a building that can be calculated and transformed into the measurements and concrete materials of an often elusive feeling, has been one of my passions.   -Aldo Rossi 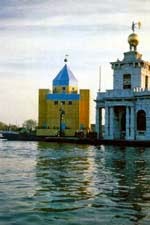 Associated with the Italian Neo-Rationalist movement of the 1970's, Aldo Rossi's work employs archetypal forms in an attempt to reestablish a connection with the collective memory of the urban environment. Devoid of functional considerations his buildings are abstractions of typological architectural elements (towers, columns, and gables, to name a few) drawn from his memories. From these experiential reflections comes the power of Rossi's buildings: to achieve a silence that enables them to be part of our memories as well as his.

Although with precedence in 18th century floating theaters, popular during carnivals, the floating theater gives a dream-like impression in its formal simplicity and bold colors. Constructed of wood (relating to Venice's wood pile foundations) and iron scaffolding the temporary structure has become Rossi's most famous, and possibly most important, building.


The emergence of relations among things, more than the things themselves, always gives rise to new meanings.   -Aldo Rossi

Constructed for the 1979-80 Venice Biennale, the Teatro del Mondo embodies Rossi's ideas about architecture but exceeds them in the imaginative solution he created, partly due to his infatuation with the theater. As Rossi reiterated throughout his career that architecture provides a stage for life, with public spaces acting as backdrops for life's experiences, the theater acts a metaphor for his beliefs. With neither theater nor architecture existing without an event, Rossi focuses on the unexpected occurrences, the ever-changing meanings of a place due to ever-changing events. His theater is not a place solely to watch performances but also a place to be watched, a place to observe and to be observed. This is accomplished on two levels, by placing the theater as an object in the water and, on the inside, by placing the stage in the center of the seats.

As spectators become part of the backdrop for the theatrical event, the city of Venice is drawn inside through window openings in the upper balconies. An uneasiness occurs as the people sitting in these areas are aware of the presence of boats and the visual rise and fall of the theater on the water. 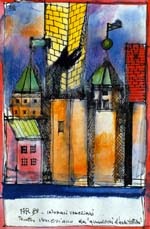 The child-like drawings Rossi created in abundance throughout his career reinforce his typological approach to architecture, where simplified architectural elements give a sense of longing. As the drawing to the left demonstrates, Rossi's repeated use of familiar architectural elements create a feeling of a place vaguely remembered, through an attempt to reconcile his own memories. In the Teatro del Mondo he created an architecture consistent with his ideas generated from life experiences, also producing the most imaginative building of his career.
Email Post
Labels: weekly dose