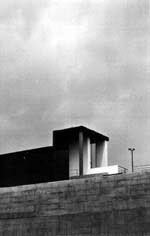 British architect David Chipperfield's first public commission, a shop for Japanese fashion designer Issey Miyake, led to a series of similar public works in Japan, including the Design Store in Kyoto. His design ideas that focus on space, light and craft appeal to a Japanese sensibility that looks at the design of the built environment in a similar fashion. And although the built work has an aesthetic likeness to the work of Tadao Ando (especially in the predominant use of concrete, steel, glass, and wood), Chipperfield's theories about architecture are unique, particularly in their approach to the ideas mentioned above. 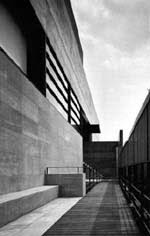 Rejecting the typical process by which architects devise plans, and then elevations that work in concert with the plan (the generator), Chipperfield's buildings are considered sectionally and experientially before plan and elevation become concerns. Early sketches give the projects a direction, typically showing not just a sense of space and material but also the mundane, everyday actions that take place within the spaces. This grounding in reality informs the creation of his spaces. Instead of designs that stop at the elevation in terms of design decisions (to be given character by specifying products and components), the sensuous aspect takes precedence. Material and light are shaped in an intuitive, and ultimately, intellectual way.


Everything starts with space. To make space is the first motivation, the first responsibility, the first problem. Space gives form, space gives plan. The plan is not a generator, it is a diagram for a spatial idea.   -David Chipperfield 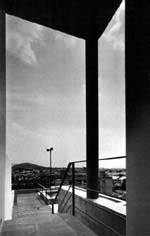 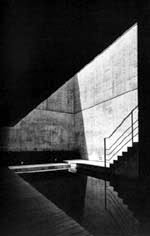 The Design Store reflects the major ideas in Chipperfield's design with a thoughtful succession of spaces, both interior and exterior. It does not resemble so much a place to display objects for consumption but a contemplative environment that transcends its "type". The control of natural light is strong, especially in bringing out the true quality of the materials (again principally concrete, steel, glass, and wood), and in turn affecting the mood and character of the spaces.

Like Ando, David Chipperfield works with a limited palette to create powerful spaces that are born from a concerned consideration of their effects on human experience and understanding. It is from this beginning that Chipperfield arrives at his goal, a goal that is possible through material, light and volume existing at the center of the architect's craft.
Email Post
Labels: weekly dose