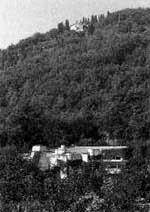 Built late in his career, the Villa Ottolenghi is one of Carlo Scarpa's more overlooked buildings. Located in the Veneto region of Italy, the house portrays some of the themes used in the architect's work, particularly the relationship between the natural and the artificial and the unpredictable nature of human life. And although this building pays particular attention to the craft and detailing of construction, typically the most appealing aspect of Scarpa's designs, it also expands beyond much of his other work in its attention to space, a product of site factors and practical concerns. 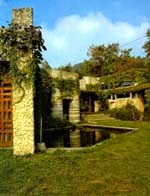 Due to zoning regulations the villa could be a maximum of one story with a limited interior area. In response to this the architect decided to bury much of the house into the terrain, reducing the scale of the house, but also creating a unique relationship to the land on all sides of the villa. The entry facade, the only true facade, fronting Lake Garda, presents the visitor the only true facade, composed of plaster walls with irregular openings juxtaposed with a taste of the thick columns that dictate much of the design (as will be discussed later.) The other side of the villa is defined by a "calleta", a deep incision in the ground that refers to the winding streets of nearby Venice. The rooms adjacent, although buried underground, received natural light from the fissure in the ground. 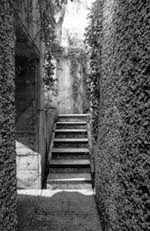 The living areas orient themselves toward the entry and the more direct relationship to the exterior. These spaces were shaped by both the natural terrain of the landscape and the seemingly random structural location of nine large columns, making up the structure of the villa. Changes in elevation occur between living, kitchen, dining and bathroom areas that otherwise have little, if any, physical separation between each other. This direct response to landscape is rare in Scarpa's work, except for possibly the Brioni family cemetery which was being worked on almost simultaneously with this project. Both projects also have in common the architect's treatment of water as a vehicle to expose his theme for a particular design. In the case of the Villa Ottolenghi, water is used to express the distinction between outside and inside, natural and man-made. Influenced by both Wright and Japanese architecture, the calm pools of water join the exterior and interior but also make one aware of the separation, especially distinct with the heavy walls and irregular openings. It is in Scarpa's use of water and, almost an opposite, the heavy columns, that he makes the visitor aware of these differences. 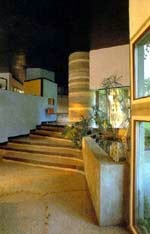 Futile to comprehend their structural coherence nor their unorthodox texture, the nine columns, located in a seeming lack of relationship to each other, combine to create the overall meaning of the house. Constantly shifted and detailed by Scarpa the columns deny an orderly composition found in both his and other architect's (especially his mentor Frank Lloyd Wright) work at the time. Ignoring this tendency, Scarpa arranged the columns to both create spatial transitions and differences, but also to express the inability for architects to bestow an order upon something so unpredictable and natural as human life.
Email Post
Labels: weekly dose