Mario Botta has built his strong reputation utilizing platonic forms with slotted openings and strong materiality, particularly brick. In recent years he has taken these traits farther, creating a personal architecture with a more expressive and primitive character. The Chapel of Santa Maria degli Angeli is a marker-and possibly a zenith-in this progression, much like Ronchamp was for Le Corbusier. This comparison can be taken farther, with each building's religious purpose and relation to nature giving them stronger ties to one another. 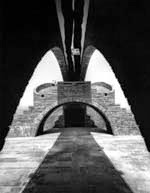 Le Corbusier's early work (1920-50) is characterized by strong forms-cubes and cylinders-punctuated by large expanses of glass, following from his five points for a new architecture. The series of villas he constructed during this time are seen as masterpieces of Modern [sic] architecture, though contemporaries were shocked and appalled at the expressiveness and plasticity of the chapel at Ronchamp, finished in 1954. The lack of ecclesiastical symbolism or any reference to religious architecture confused people, but the primitive-like space and beautiful qualities of light indicated something special. It is now considered one of the greatest buildings of the century (aside from any dogmatic categorization) and seen as a true artistic expression. Le Corbusier's lifelong struggle between the practical and the artistic found a symbiosis at Ronchamp.


The spatial values pursued in architecture should be seen as values of "habitation" that are being offered to people.The more enigmatic aspects of our constructed images are indispensable signs that speak to us and question us as to the meaning of our task.   -Mario Botta 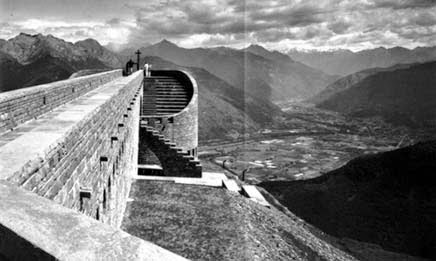 Botta's career parallel's Corbu's in many ways, especially the evolution of forms from ideal to expressive and a strong dialectic of practical and artistic considerations. The Chapel of Santa Maria degli Angeli gives a hint of the earlier platonic forms, as a cylinder is sliced at an angle to create outdoor steps and a ceiling for the indoor chapel. This form becomes part of a greater whole, though, instead of an ideal. It cradles the long bridge that must be traversed to reach the chapel, and guides the visitor down under the arch to the entrance. Although symmetrical, the building has a natural quality, the rough stone arising from the mountainside, or was built long before what history records.


Inside the chapel space is the inverse of the exterior. The cylindrical walls bring the congregation together (echoing St. Peter's colonnade), while the walkway sets up the axis of their gaze. This unified vision that reaches out to the landscape comes not from a referential or traditional scheme, but a wholly unique approach, influenced by both the coming together of people and the landscape that is the backdrop for their daily lives. 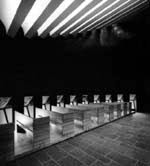 While it is premature to equate Botta with Le Corbusier, especially since an architect's greatness comes long after passing, the paths that each has taken indicates a strong artistry and the validity of the primitive in art and architecture. At a time when people are preoccupied with technology and its effects on the future, it is refreshing to see an architecture that attempts to take us to our roots, to put us in touch with what makes us human.
Email Post
Labels: weekly dose