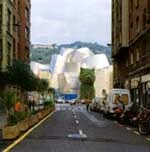 Easily the most publicized building of the 1990s, the Guggenheim Museum in Bilbao Spain was completed in 1997 to critical and popular praise. The completion of the building also guaranteed Gehry's presence among the great architects of this century, and a father-figure for young architects in the next century. The museum is a long way from his early work, including his own residence in Santa Monica, California, but is indicative of Gehry's development from the 1960's. Beginning with small budgets, he utilized cheap materials to arrive at formally inventive solutions not possible with expensive materials. Clearly a product of the open-minded Los Angeles environment, the possibilities of formal expression grew with each new job, due to his rising prominence and improved technology. With the erection of this 265,000 square foot museum across the Atlantic many people believe Gehry has reached his zenith as an architect. Though the opposite is true, as his past indicates; his inventiveness and exploitation of the latest technology is wide open, as the Guggenheim, Bilbao attracted 2 million people in its first year of existence.

A product of collaboration between the Basque government and the Solomon R. Guggenheim Foundation, the museum is a catalyst for development in the former warehouse district. The public plaza at the entrance allows, and encourages, pedestrian flow between the Guggenheim, a nearby art museum and the historic district. The cacophony of forms contrasts strongly with the old buildings on adjacent streets, echoing the rising mountains beyond. Greeted by Jeff Koons' gigantic poodle, the museum-goer is made aware of the museum's scale, which almost abolishes the historical museum's placing of art objects in small, cubical rooms. Just like Wright's Guggenheim in New York City, Gehry created an environment that affects the way art is displayed, and changing the way artists create art. Many artists, such as Koons, have made works specifically for spaces in and around the museum. Longtime collaborator with Gehry Claus Oldenburg and Coosje van Bruggen place an oversized badminton flight, drooping from a balcony in the large atrium space.


As in the Merzbau [by Kurt Schwitters], the only true "inhabitant" of the Guggenheim is the architect himself, he who wishes to see himself reflected in an endless work and offer his operation as the only spectacle. From this point of view, the analogy of the other Guggenheim, in New York, is evident: what they both display is only architecture; they exhibit themselves.   -Francesco Dal Co

Inside, the gallery spaces are comprised of three different types: conservative for permanent collections; a more dramatic, elongated rectangular space extending toward the Puente de la Slave Bridge for temporary exhibits; and seven distinct galleries of unique spatial quality for selected living artists. This programmatics is evident on the exterior of the buildings as limestone-clad rectilinear volumes enclose permanent collections; the fish-like extension houses the temporary exhibits in one grand, linear space; while the grouped forms around the apex form the spaces for the living artists. Looking at the Guggenheim in this manner it is evident how Gehry works, from a plan that satisfies programmatic requirements out to a formal expression of the spaces. 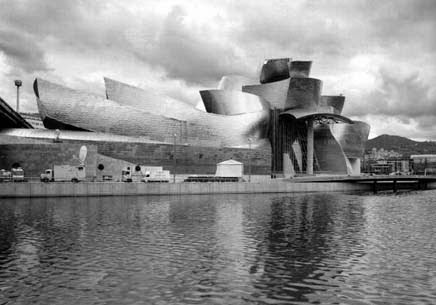 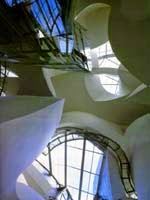 Much has been written about the Guggenheim Bilbao (enough that it is known by the city it resides in) but the appeal and impact of the building is speechless. It is a dramatic awe that confronts the visitor. Much like Gothic churches of the middle ages, it is humbling, yet inspirational. It makes us realize that mankind can achieve something so grandiose and beautifully complex. It deserves attention even though nothing in its external form comes close to resembling anything ever built. This not-derivative architecture gives us insight into the possibilities of the human imagination. And just like Gothic churches, it is creations like this that will be the zeitgeist for our time.
Email Post
Labels: weekly dose