Visions of Light traces the evolution of cinematography from the origins of the motion picture camera to films at the close of the century. The film uses comments from cinematographers and director's of photography to illustrate the importance of light in telling a story. Arranged chronologically, the relationships between a film's visuals and technology and the culture of Hollywood are the most influential.

Early films carried photography to the medium of film, most filmmakers using the motion picture camera similarly to still cameras. Over time filmmakers began to use movies to create a story. In a sense the "silent years" were movie's golden age: unencumbered by sound any expression of feeling or thought was accomplished through the camera.

Sound briefly hampered film's progression as the camera grew to accommodate the aural input. Studios flowered, though, and cameramen developed devices that created "signature" looks: MGM's glamour, Paramount's gloss and Warner Bros' hard-edge. These years placed the emphasis on the actors and actresses, leaving little room for experimentation in an environment where movies were made as fast as possible.

It is easy then to appreciate the importance and influence of Orson Welles' Citizen Kane, photographed by Gregg Toland. Most significantly Toland used cameras being developed at the time that let in more light, allowing deeper focus. This gave greater freedom to Welles in placing his actors and helped to give meaning to each shot. The shot at left is a good example, where we see Kane's parents signing over the custody of their son. The mother's position shows her dominance in the family (the father stands in back, silently observing), while Kane's presence outside, unaware of the proceedings inside, complicates matters. A few years earlier the background would be blurry.

The next major movement in film was film noir, a visually sparse style that placed more emphasis on darkness than ever before. The stories of this time paralleled the visuals, providing bare minimum in terms of story and facts, helping, with the visuals, to create a sense of mystery. What is in those dark spaces? As one cinematographer remarks, "What's important is the light you don't turn on." Film noir was a product of black and white Hollywood, of photographers getting used to seeing without color.

Color, of course, changed all that. The abstract nature of black and white film was replaced by the more realistic color stocks. This changed narration in film, and with the invention of Cinemascope and Panavision the proportion of the film changed. Now filmmakers had to decide what to do with the sides of the screen: the exploitation of the horizontal format is seen at left in Lawrence of Arabia. The next major shift in photographing movies occurred with the French new wave and their influence upon American filmmakers. Their freer use of the camera and more documentary-like look (both inspired by the narrative) affected not only the look of American films but also a move away from the studio system. A move that is evident today as an "anything goes" attitude exists in all currents of film.

Here are three memorable stories from Visions of Light that illustrate the power of cinematography in telling a story:

Photographed by Conrad Hill, a scene late during In Cold Blood finds actor Robert Blake's character facing the death penalty. In the scene he is talking to a priest about his father, whom he both loved and hated. It is a sad scene, though Blake is very unemotional. Instead water streaming down the window outside is reflected on his face, crying for him. It is an amazing example where light can describe emotions, apparent or hidden. But in this case it was completely an accident. Hill did not have the forethought for that effect; it occurred from a fan blowing the spray from simulated rain on a stage against the window. 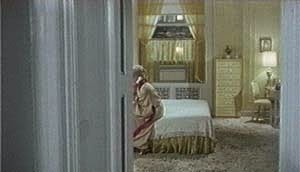 Roman Polanski is a product of the Polish school of directing, where visuals play a large part in the story. In Rosemary's Baby, shot by William Fraker, Polanski uses the camera very sensitively to bring the audience into the story, be it deceptively. The shot above takes place after the woman leaves the adjacent room (our POV) to make a phone call in the bedroom. Fraker explains, in Visions of Light, that he framed her fully, but Polanski edged him further and further left until the actresses face was not visible. The cinematographer felt this was a sloppy shot but understood its impact when, during the first public screening of the film, everybody in the theater leaned over to look around the door frame. As Fraker said, "That's Roman Polanski."

Bernardo Bertolucci has teamed with cinematographer Vittorio Sottaro to create visually amazing films. The Last Emperor is arguably their finest achievement, in this instance using light and color as an analogy for life. Early in the story, a thick pool of blood comes from the adult Emperor's wrists; the color red analogous to the beginning. The scene begins a flashback where we see the future Emperor taken from home as a child. Here orange is the prevalent color, signifying the womb and family. Arriving in the Forbidden City yellow predominates, a symbol of identity and conscience. Not until his tutor arrives later in his life is the Emperor exposed to green, associated with knowledge. The film uses color to act symbolically but also to express the film's meaning: that knowledge outside of the Forbidden City can hurt the Emperor.
Email Post
Labels: weekly dose