Landesgartenschau in Weil am Rhein, Germany by Zaha Hadid, 1999 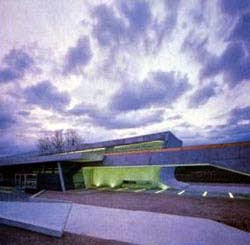 Zaha Hadid's first major executed project, the Vitra Fire Station, brought her, and the chair manufacturer's campus, international attention. Containing structures by Frank Gehry, Alvaro Siza, Nicholas Grimshaw, and Tadao Ando, in addition to Hadid, Vitra became synonymous with cutting-edge design, even though most of the company's output is early Modernist design. The adjacent German town of Weil am Rhein took advantage of Vitra's attractions, choosing Hadid because of her formally bold fire station. Though the British architect has a recognizable style - evident in her sweeping, gestural paintings - the proposal for the Landesgartenschau (state flower exhibition) stands apart from her previous works. Hadid's fire station at Vitra is an object, sitting in a concrete campus, making itself known. The strong curved and pointed walls and roof planes describe the building's origins: lines of force drawn from the surrounding landscape. It commands attention while referring to something outside of itself. The Landesgartenschau appears similar, with its sweeping concrete surfaces and linear, angled composition. But instead of acting as an object, the Landesgartenschau is an extension of the landscape. The building "arcs up from the ground, as if incised and folded back from the land" (Architecture, July99), presenting the visitor multiple opportunities above and around, never becoming purely a destination. 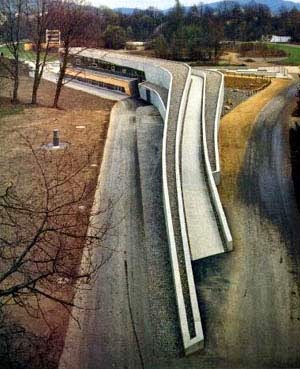 The small program contains exhibition (with mezzanine), a cafe (with terrace), and some offices.These uses are contained in a complex, linear space, with offices in a wooden volume, jutting from the concrete "ramp". Support and mechanical spaces are located in the "elbow", inherently the vertically tightest spaces. Typical of much of Hadid's designs, programmatic elements are squeezed into narrow, long spaces - a product of the sweeping curves consistent in her work. This weakness, though potentially unbearable in a residence, is excusable in an ultimately temporary building (the Landesgartenschau is a six-month long exhibition that different German cities host each year, though it most likely will have an extended life span).Without artifacts occupying the spaces, the building (much like Libeskind's Jewish History Museum in Berlin) stands on its own, especially the strong interiors. Surfaces of concrete, glass and wood slide past and through each other, giving the spaces a restless, jarring quality, contrasting with the calming views through the wide expanses of glass that run most of the its length. 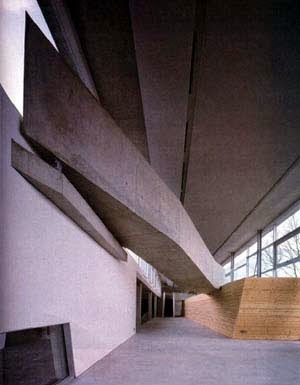 Both the Landesgartenschau and the fire station use site characteristics as a design strategy, though each to different effect. The differences can be attributed to adjacency relationships: the fire stations relation to landscape away from the immediate site, and the Landesgartenschau's relationship to, and transformation of, the immediate site. The uniqueness of each can also be attributed to a changing attitude to landscape, both by the architect and the general public. From the steady increase in population all over the globe to the nauseating hype of information technologies, people are looking to the landscape for meaning and utilizing nature to our and her advantage. The Landesgartenschau does not solely emulate and transform the terrain; it buries itself to stabilize interior temperatures, houses an air cooling system underneath the building's "tail", while shading the windows with louvers. The building does not scream "I'm green!", shielding itself under a grass mound. It sensitively and carefully molds the terrain to create an evolved "green" architecture: grounded expressionism.
Email Post
Labels: weekly dose