The Tao of Architecture

The Tao of Architecture by Amos Ih Tiao Chang, 1956

This is an excerpt from Amos Chang's The Tao of Architecture, words that stand up on their own and ring true today, as much as they did when written, in 1956. Chang uses Lautzu's Tao-Te-Ching as a template for a text on creating architecture, specifically intangible content's importance in architectural composition over tangible form. The illustrations are a project I completed for the 1998 James Steedman fellowship competition, sponsored by Washington University in St. Louis. The multi-use project is located on the Seine River, across from Notre Dame in Paris.

The means for architectural composition is something conceivable. To achieve the end of a composition concerns personal creativity and is beyond our knowing. It seems, however, that Lautzu's thinking is also helpful in this respect.


The way to learn is to assimilate. The way to know is to forget.

Consistent with the philosophy of non-being, to forget is regarded as an affirmative and constructive action. This is obvious to anyone who has experience in creative work. It is so, not only because we believe that there is a creative power existing in our subconscious mentality, but also because the more forgetful a man is, the less he will be inhibited by his knowledge which may and may not be helpful in a new problem. 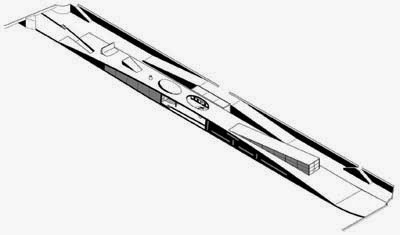 Art is artifact that grows. Unlike science which gives form to what is formless, art releases what is artificially captured. From a positive point of view, it is right to say that form usually follows function. In order to release aesthetic and character expression from the prison of functional formalism as well as to tolerate physical limitation, it is equally profitable to know that human adaptability has no definite limit and that function may well follow form. It is when rationality and irrationality compromise each other that the art of architecture acquires its first liberty of growth.
Email Post
Labels: weekly dose