iN.fOrmant.system in Chicago, Illinois by Doug Garofalo and Randall Kober, 2000

The following project and text is by Doug Garofalo and Randall Kober, as part of the "MATERIAL EVIDENCE: Chicago Architecture @ 2000" exhibit currently at the Museum of Contemporary Art in Chicago.

As architects we find ourselves increasingly employing digital media to shape, modify and make flexible various "performance criteria" in design and fabrication processes. Our strategy for the “Material Evidence” exhibit at the MCA Chicago configures the issues of materiality and program into a structure that can be seen to vary in form (across space) and performance (over time).

The in.formant.system prototype demonstrates three ideas relative to materiality: first, that the interaction of even a small palette of materials can be treated as a flow of matter; second, that this “performance” is constructed using parametric modeling techniques inherent to animation software; and third, that the material effects produced by these two ideas may collaborate with and expand the given program of a newsstand. Materiality considered this way promotes an active, multi-scaled, relational network, with architectural material set up as fields of information to travel through, work in, and play with.

For architects materials in and of themselves are (arguably) inert, "virtual" in the sense that they have yet to be "actualized." In other words, materials have no specificity until manipulated into something, some specific shape, for example. Yet material scientists fabricate new materials atom by atom, purposefully altering a single configuration and/or relationship between elements to produce a radically new material. What is important for architecture today is not the promise of some future miracle material, but the way in which material properties and possibilities can now be seen emerge according to various forces, constraints and assembly methods. Particularly with the advent of sophisticated digital modeling software it can be argued that the practice of architecture involves a sort of parametric thinking directed toward the production of architectural effects. 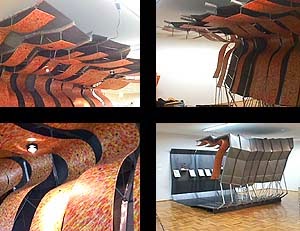 The in.formant.system consists of an array of heterogeneous enclosures that each function as urban street furniture. As an urban proposal they would collectively represent an intensive and multiplicitous architectural response to the ever-increasing homogeneity and dullness of public space. The system is "broadcast" (like seeds) across the urban field with no immediately apparent pattern. However, the system operates as a swarm of protective enclosures that each house various time-sensitive, information-based programs. From the conventional newsstand to small street-performance shells equipped with midi-operated devices, information is not just blandly presented and consumed, but potentially performed in public using this wired network of urban micro-structures.
Email Post
Labels: weekly dose