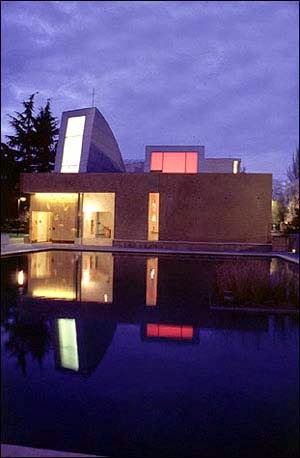 The second Steven Holl building to be featured on this web page, the Chapel of St. Ignatius, on the campus of the Seattle University in Washington, differs in many ways from his Storefront for Art and Architecture in New York City. While the latter is clearly a product of the congested urban condition, the chapel is a free-standing sculptural object, even utilizing an adjacent man-made pond for effect. Like much of Holl's work the project began with a concept that later dictated the form and tectonic nature of the completed work. The architect concentrated on the importance of light in religious architecture and developed the idea of multiple light cones, bringing light into the interior during the day and glowing as a beacon to the community outside. The building is significant in heralding a new phase in Holl's career. While still focusing on creating space through detailing, proportion, and the manipulation of light, now Holl is expressing more sculptural tendencies, evident in his most famous recent work: the Kiasma Museum of Contemporary Art in Helsinki, Finland. The different "lights" correspond to parts of the church program, relating to the Jesuit Catholic worship: 1. Procession natural light, 2. Narthex natural light, 3. Nave yellow field with blue lens in the east and the opposite in the west, 4. Blessed Sacrament orange field with purple lens, 5. Choir green field with red lens, 6. Reconciliation Chapel purple field with orange lens, and 7. Bell Tower and pond projecting, reflecting natural light. As sunlight is brought into the interior primarily from the roof, space is shaped by both light and the changing topography of the ceiling. Although this is reminiscent of Modernist principles of design, the different ways of filtering and reflecting light among sculptural "bottles" gives the interior the spiritual quality the building deserves. 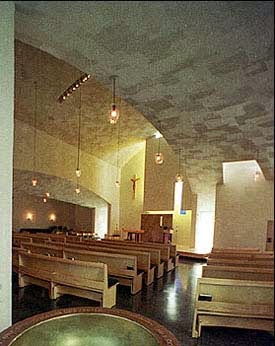 Of course, this description relates the building directly to Le Corbusier's chapel at Ronchamp, where stained glass and light reflected from colored surfaces illuminated the otherwise cave-like interior. And while Holl has a unique design process (enough that his buildings are instantly recognizable) and this chapel is a culmination of his working with light and materials on previous projects, this influence is most evidently worn on his sleeve. But the differences lie in the materiality of each structure: Le Corbusier's chapel uses rough concrete to achieve a primitive quality while Holl's means are more eclectic: precast concrete panels stained Roman ochre for the exterior, cedar and bronze in the entry, and wood flooring with plastered ceilings and walls in the rest of the chapel. 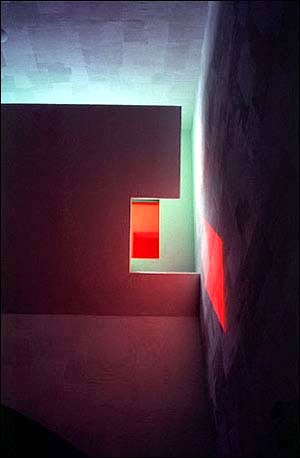 Steven Holl's consistent body of work, experimenting with light, materials and their relation to/creation of space, has earned him larger and more noticeable commissions. With these recent projects he has now experimented with form, though restrained through his analytical and mathematical design process, such as his reliance on the golden section for proportions. Not to dismiss his recent work as lacking, though, for works like this chapel and the museum in Finland exude a maturity born from strong architectural principles that he has carried from the Storefront through to today.
Email Post
Labels: weekly dose