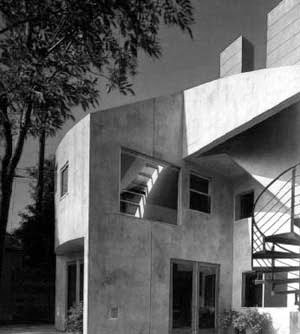 The evolution of the American house has paralleled changes in the family, both in its focus and its structure. The fireplace, long the center of the home, was supplanted by the family room and its accompanying glowing box for family gatherings. The focus moved from inward to outward; to the world outside of the family. Now in a world of constant visual stimulus (television, computers, advertising) the location for interaction with family and friends rests in the kitchen. 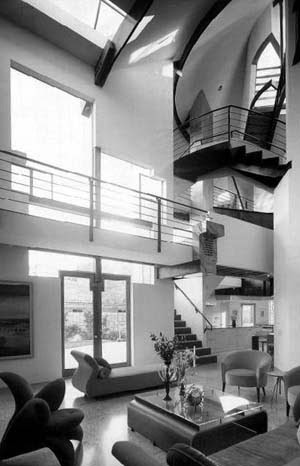 The Lawson/Westen house in Los Angeles, designed by Eric Owen Moss, reflects this change. Both in plan and in space the kitchen has a constant presence, a multi-story space contained within a truncated and sliced cone. These two formal gestures dictate the form of the rest of the house: truncating the cone creates a skylight bathing the space in light and slicing the truncated cone perpendicular to the ground plane creates a parabolic section that extends through the living areas. Moss's quirky style of design is expressed in these formal maneuvers which continue as the house becomes an architectural experiment. Volumes are cut with sections removed, structure is continued beyond what it contains and windows angle and wrap corners. 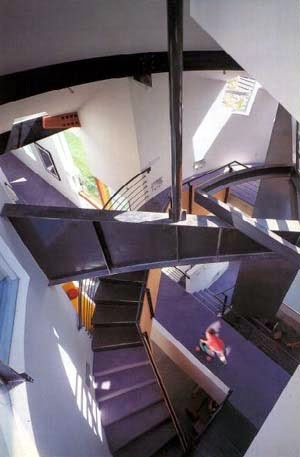 This experimentation lead to Moss's more popular structures in Culver City, California, in more and more complex arrangements of structure and material, often bordering on extreme. Works, like the Box that resembles an exploded glass cube, epitomize his evolution. The Lawson/Westen house's restraint makes this design more tolerable than his recent work, while acting as a stepping-stone towards the latter. In the former though the expression is more prevalent inside, creating beautifully complex spaces, climaxing with the kitchen. 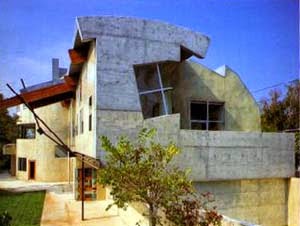 The architect's attempt to satisfy the client's wish for a culinary-centered world, with his desire for complexity and fragmentation, raises questions about the relationship between architect and client. Is it the architect's prerogative to impinge a preferred formal vocabulary on the future resident? How much voice should the client have in the aesthetic design of their house? Does a balance exist? In relation to this house the answer to the last question is yes (as it is for his work in Culver City). Giving Moss freedom to experiment the family now lives in a house that expresses both the their way of living and the architect's ability to express this.
Email Post
Labels: weekly dose