The following is an excerpt from R.M. Schindler's 1912 Manifesto. Images are taken from David Gebhard's 1972 book, Schindler. 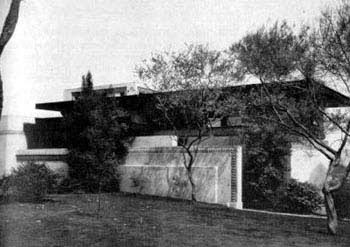 Director's House, Los Angeles
The first house was a shelter.
Its primary attribute was stability.
Therefore its structural features were paramount.
All architectural styles up to the twentieth century were functional.

Translucent House Project, Palos Verdes
Architectural forms symbolized the structural functions of the building material.
The final step in this development was the architectural solution of the steel skeleton: Its framework is no longer a symbol, it has become form itself.
The twentieth century is the first to abandon construction as a source for architectural form through the introduction of reinforced concrete.
The structural problem has been reduced to an equation. The approved stress diagram eliminates the need to emphasize the stability of the construction.

Leimert Park Project, Los Angeles
Modern man pays no attention to structural members.
There are no columns with base, shaft and cap, no more wall masses with foundation course and cornice.
He sees the daring of the cantilever, the freedom of the wide span, the space-forming surfaces of thin wall screens.