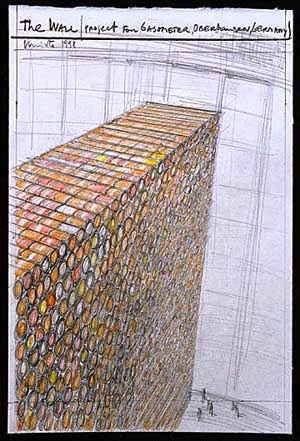 Christo and Jeanne-Claude are known for their wrappings of structures and natural features, acquiring international acclaim outside the art world with 1995's Wrapped Reichstag in Berlin. Much of their early work though did use other materials and objects, with six completed works using oil barrels. This work, their seventh, is located inside a Gasometer in Oberhausen, Germany. The structure, built in 1928 to store the gaseous by-products of iron ore processing, is 110 m (360 ft) high with a 68 m (223 ft) diameter, with the wall of oil barrels 26 m (85 ft) tall and 7.23 m (24 ft) deep, filling the diameter of the Gasometer. The installation is accompanied by two exhibitions, documenting two projects by Christo and Jeanne-Claude: The Umbrellas (Japan and USA, 1984-91) and Wrapped Reichstag (Berlin, 1971-95). 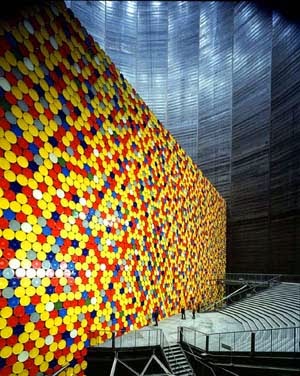 Of course the wall does more than separate the space for the two exhibitions, it transforms the space through its size and color, (the latter indicating the massive task of assembling and installing the work) and makes a strong statement through the use of oil barrels. The political focus of the earlier oil barrel works (for example Wall of Oil Barrels, Iron Curtain, built in a street in Paris shortly after the rise of the Berlin Wall) carry over into this most recent undertaking. The dependency of most of the world on oil and its by-products leads to a rapid depletion of this natural resource, while oil spills pollute bodies of water and kill creatures that rely on the once clean water. Yes, this is common knowledge. But what can be done to remedy our dependence and destruction? Alternative strategies and technologies are available, but oil has become a measure of power between nations, making any cleaner, and possibly more efficient, options difficult or impossible. Witness the United State's involvement in the Persian Gulf War. Instead of using Iraq's stronghold on oil to promote optional means and methods (solar and wind energy, electric cars,...) to lessen a dependence on oil, the government used military force under a smokescreen of protecting American citizens in the Middle East. This naive over-simplification illustrates a paradox: that which sets us free also constrains us. 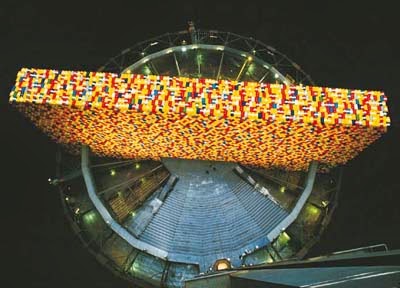 But why 13,000 oil barrels in a Gasometer in Germany? The location is obvious; the structure a container for the dangerous by-products of processing iron ore. Stacking the barrels inside hints that if the wall of barrels collapses the oil inside will be contained. Each material (iron and oil) has eventual destructive effects on the planet; the Gasometer symbolizes man's futile attempt to contain their destruction. When an oil tanker runs aground, though, the ship's hull must be strong enough to contain the oil. On June 26, 1998 a barge did this very thing in Biscayne Bay off the coast of Miami, Florida, luckily without any leakage. This near-spill is relevant because Christo and Jeanne-Claude surrounded nine islands in Biscayne Bay between 1980-83, and the barge was containing, yes, 13,000 barrels of oil. I do not know if the artists knew of this occurrence next to the site of one of their first large-scale works, but the location and quantity seem to be much more than a coincidence. 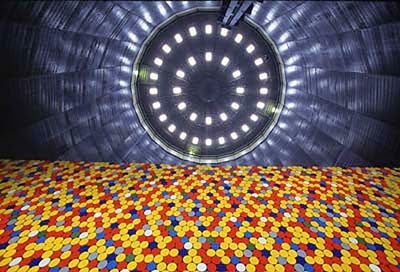 With the various ways of reading Christo and Jeanne-Claude's work no single view takes precedent, true when critiquing anyone's work. The Wall, 13,000 Oil Barrels is simple and overwhelming enough to elicit many interpretations outside of the one positioned here. It is these two qualities, integral to the couple's art, that will push them into the spotlight with each new work.
Email Post
Labels: weekly dose