What Is Architecture? An essay by John Hill
(Something I dug up from my college days.) 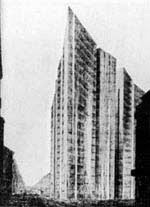 Architecture is generally considered an art but is differentiated by it in one respect: function. Regardless, defining architecture is almost, if not as, difficult as defining art. To define architecture is to set parameters, standards by which anything applied to these criteria will either fit the definition or not. The definition must take certain conditions into account that must be present in order for something to be considered architecture. Some of these may include, in reference to a candidate for a piece of architecture: it must be material, it must transcend mere function, it must be aesthetic and it must be designed by an architect. These are some criteria that are generally agreed upon by the public and most architects as necessary traits of architecture. If we look at these briefly, though, small arguments arise that challenge the validity of these claims. 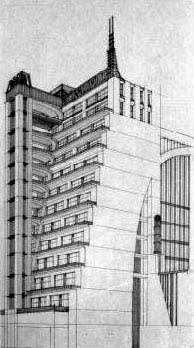 If a piece of architecture must be material, does this place the work of Antonio Sant'Elia (above) outside the realm of architecture? Or Mies van der Rohe's Friedrichstrasse skyscraper? These have influenced architecture as much as anything else built at the time. Should the fact these were not built exclude them from fitting a definition of architecture? 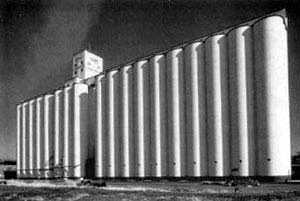 If architecture must transcend mere function as a condition, a grain elevator is not a piece of architecture. Grain elevators (above) are generally considered purely functional, engineered buildings, satisfying their intended needs and surviving for many years. But with photographic essays devoted to the subject, and the state of these structures changing over the years (with some near the point of ruin), they have entered the realm of architecture in our time.

Modernism led to a detest for architecture in the general population with its lack of ornamentation and its monotony. The public decried a Miesien black box as ugly, while architects and critics praised its proportion, details, and innovation. The backlash against Modernism by architects in the 70s and 80s, Post-modernism, was loved by the public but hated by many in the profession. If architecture must be aesthetic, who is to say what this aesthetic is?

Architecture must be designed by an architect. This is a view that has been changing to include, for example, engineers and developers. With the many urban structures constructed done by engineers and the majority of suburban residential work done by developers, the public is being exposed to more structures built by these groups. The view that architects only design architecture is changing as the public's view of what is architecture is is affected by others.

Two main points arise from these brief paragraphs: architecture is defined by those who know about architecture, and the definition of architecture changes from time to time and from culture to culture. What is architecture? Like many other philosophical questions this query cannot realistically be answered. The purpose of the question is to provoke discussion about the subject and consequently redefine the subject and lead it in new directions.
Email Post
Labels: weekly dose