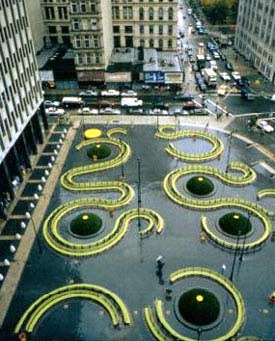 Located near the financial district of Manhattan, Jacob Javits Plaza was formed by government office blocks that opened on the southern end of the island in 1967. Inhabited by Richard Serra's "Tilted Arc" from 1981 until its destruction in 1989, the plaza is now home to a more friendly intervention; green benches snaking around grassy mounds, as designed by landscape architect Martha Schwartz. While an aesthetic contrast from the previous occupant the new design shares some similarities with Serra's minimal piece. 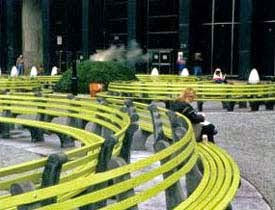 Serra's "Arc" essentially split the plaza into two spaces: the outer expanding and the inner contracting as the steel tilted toward the arc's center. Like much of his other work the sculpture used minimal materials to maximum effect; in this case creating unease in the pedestrian walking near the leaning wall. And like his other large-scale public works the "Tilted Arc" created a fair share of controversy, ending in destruction. The arc's demise signals two interesting aspects of Serra's work, and art in general: an object does not need to be grotesque to offend or disturb people and space is defined by something as simple and singular as a wall. 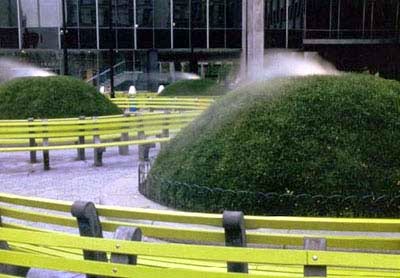 Martha Schwartz, on the other hand, utilizes every part of a design to achieve maximum effect. With her scheme for Javits plaza everything is designed: paving, landscaping, seating, stairs, handrails, bollards, trash cans, and drinking fountains (the benches, drinking fountains and trash tongue-in-cheek variations on Olmstead designs). The layout is basically six earthen mounds scattered among the plaza with back-to-back benches winding around these mounds that exhaust smoke. Where Serra's strength comes from the material, mass, and configuration, Schwartz's comes from the juxtaposition of elements (smoking mounds, lime-green benches, egg-shaped bollards, bright blue drinking fountains) to create a surrealistic mirage in the middle of a gray district of New York City. The design does not neglect practical considerations as the benches provide seating for the busy lunch population, while creating different spaces with internal and external focuses. 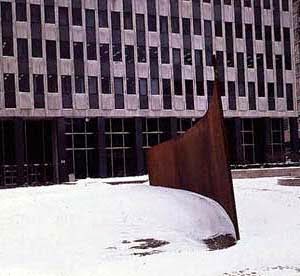 This last statement begins to illustrate the similarities between the two projects mentioned. Just as Serra manipulated a wall plane to create space Schwartz curls the benches like strands of hair to create different spaces in relation to the bench's use (inside curves for groups, outside curves for sitting alone). Though that is the end of any similarity or influence, as the superficial treatment of the benches and other elements on the site deter the design from being taken seriously, relegating it as remixed post-modernism.
Email Post
Labels: weekly dose