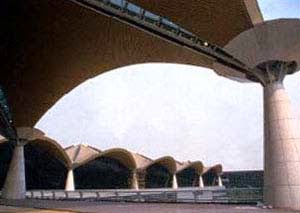 Malaysia's economic growth, created by and dependent upon technology, found a symbol in the Petronas Towers, designed by Cesar Pelli and finished in 1998. The subsequent award given to these twin towers as the world's tallest building brought international attention to the country's capital, Kuala Lumpur. As foreign investors are lured to the city, upgrades are necessary for increased transportation. The Malaysian government looked to Japanese architect Kisho Kurokawa (working with local architect Akitek Jururancang) to design a new airport, joining those in fellow Asian cities Hong Kong (Norman Foster) and Kansai (Renzo Piano) with likewise strong designs. 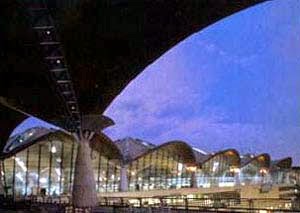 These three airports exhibit the current trend in airport design: linear terminals that allow the maximum number of planes to dock with the minimum linear area. Replacing Y-shaped plan configurations, Helmut Jahn's United Airlines Terminal at Chicago's O'Hare Airport established a structural shape extruded along two bars linked by an underground pedway. Since this design new major airports have adopted the solution of a repeated structure to a linear plan, including the two aforementioned airports (with slight exceptions). 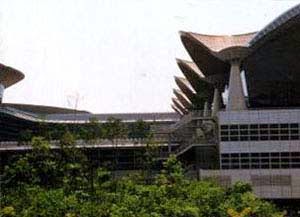 Kurokawa utilizes repetitious structural bays in two symmetrical terminals, national and international, symmetrical to each other as well. Each terminal building has one basement and five floors above ground, creating a 4 million sq. ft. airport (including satellite support structures). Like all the other airports mentioned the interior focus is directly under the structure, in Kuala Lumpur the departures lounges. Conical columns support the undulating roof form with slender skylights formed at the seams. The roof extends beyond the interior shell to make one gesture towards the humid climate of Malaysia; creating shaded outdoor spaces between automobile and airport. 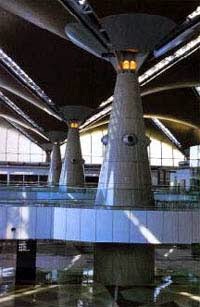 Looking at the airport's design in relation to previous designs, Kurokawa is successful in creating a form that fits the functional requirements of air travel today. While the terminals recall recent airports in the structural repetition they also remind one of Eero Saarinen's TWA Terminal at JFK airport in New York City, with its bird-like symbolism. If this likeness is intentional only Kurokawa knows, but with Malysia's lack of a national architectural style or symbolic vocabulary the architect probably looked elsewhere for inspiration. As the country attempts to express a national identity to foreign investors, outsiders are ironically asked to do so. Pelli's use of Muslim symbolism as a plan device for the Petronas Towers is not a more valid means than Kurokawa's possible reinterpretation of a structure that looked at man's desires. His desire to conquer nature while simultaneously finding inspiration in nature.
Email Post
Labels: weekly dose