College in a Forest

College in a Forest in Fredrikstad, Norway by Duncan Lewis, 1998

Located in the wooded, rocky landscape of Fredrikstad, Norway, Duncan Lewis's project (with Pir II Arkitektkontor) for a college attempts to integrate into the existing landscape, paralleling the school's pedagogy: making students aware of environmental issues. Lewis uses an environmental approach both in the building's siting and its aesthetic. 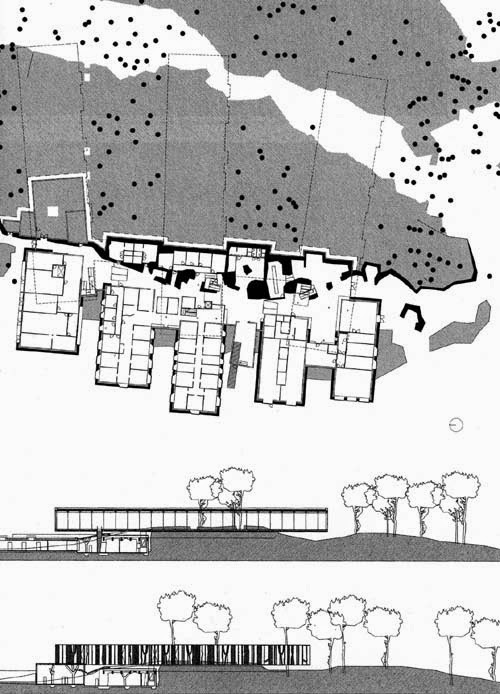 Similar to Rem Koolhaas's design for a one-family house in Floirac, France, the college is broken down into three components: auxiliary spaces built into the rocky, sloping site; five wings emerging from these spaces, as well as the rock below; and three light, almost transparent, metallic beams, containing classrooms in an open plan. The first grounds the design into the earth, the second brings it out of the earth (the walls made from the same rock as the site), and the third places objects on the site, ultimately giving the project its expression. 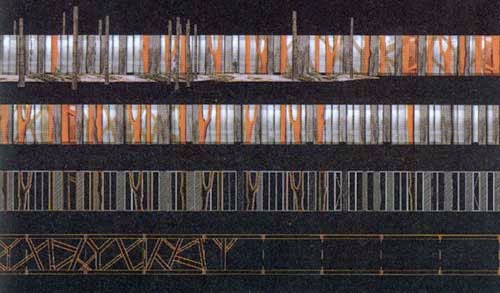 The diagram at left shows the elevations of one of the beams, each differentiated by a different color. The beams are prefabricated off-site and basically placed on the site, which is homogeneous enough that no extra foundations are necessary. With tree removal necessary to place the classroom spaces on the site the architect has created a simulacra of the native vegetation: translucent trees of polyester resin molded into the facade. Lewis's imaginative solution to the site's destruction makes the inhabitant aware of the relationship between man and nature while commenting on how man views nature (as an artifact?). 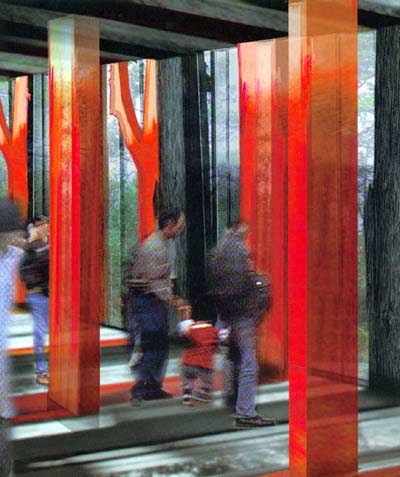 The design raises many questions that will, no doubt, influence the students attending the college. The appeal of the project rests highly on the fascinating renderings that jar the viewer from any previous expectations. Now we can only await the completion of the school to see if the fusion of idea and technology achieves what the images promise.
Email Post
Labels: weekly dose