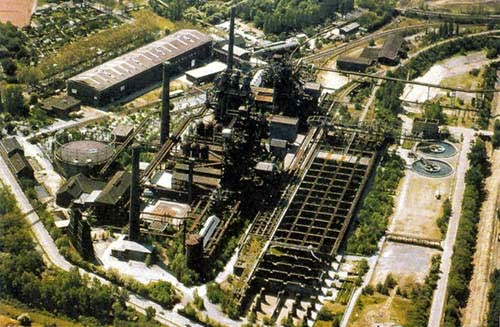 The Park Duisburg Nord is only a small portion of Germany's effort to reuse old industrial areas in the Ruhr river basin, the park a part of a large green belt area in the Emschler region. Latz + Partner's winning design has set a precedent for regenerating obsolete industrial lands in urban areas, though the park was only completed this year. Its influence is for good reason; instead of creating a tabula rasa surface for development the design attempts to celebrate the area's industrial past by integrating vegetation and industry. The evident contradictions add to (not detract from) the park's overall effect. Blast furnaces, a gasometer, cooling tanks, railroad tracks and slag heaps, among other things, occupied the land upon which the park was added. Instead of tearing down the blast furnaces walkways move through them; the gasometer, now clean, is home to a scuba diving class; the cooling tanks now exist as lily ponds; the railroad tracks are bike paths; the slag heaps grow wild with acacia and ailanthus trees. Nearly everything has been reused in some manner, playing with the distinctions between natural and artificial, while confusing our definition of "park". 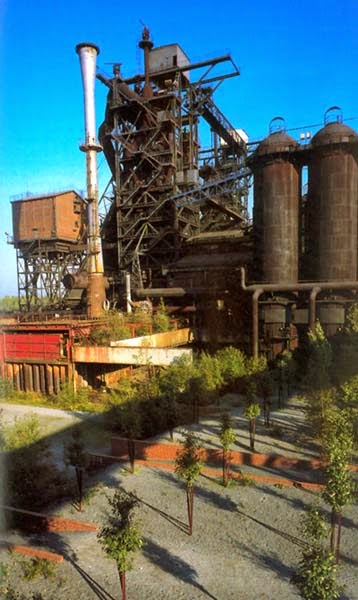 These images hint more at nature reclaiming the industrial land than a planned landscape design, though this is only part of Latz + Partner's approach. The design attempts to strike a balance between formal and informal vegetation, as well as utilizing more architectural means, for example, the aforementioned walkways. The latter is a small part, though, of what makes an experience at Park Duisburg Nord rewarding: the architects paid special attention to movement through the site, with varying levels of control apparent. 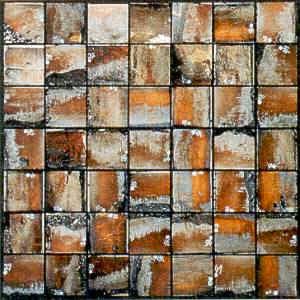 As Pittsburgh, and other cities, look to Park Duisburg Nord for inspiration it is evident that our way of looking at history, and the world around us, is changing. Something as practical ,and to many people as ugly, as an industrial complex is preserved as part of Germany's cultural heritage, while it is transformed into a place of enjoyment. By literally defining the park as a post-industrial landscape Latz + Partner will hopefully affect how people think not just about industrial areas but any place or space that helps to define a culture.
Email Post
Labels: weekly dose