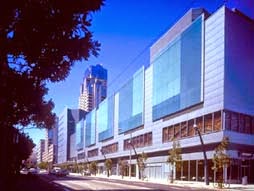 Situated on the western edge of Yerba Buena Gardens in San Francisco, Sony's Metreon has the benefit and responsibility of one of the most popular sites in the city. Also bordered by the Center for the Arts Theater & Galleries and the Museum of Modern Art, the park has become an attractive public space with a consistent stream of tourists and art-goers. The Metreon adds a capitalistic punch to this mixture with 15 cinemas, an IMAX theater, entertainment venues (ride simulation, virtual reality, and interactive media) and retail spaces. The building, completed in summer 1999 and designed by SMWM, successfully addresses its site but also, more importantly, sets a precedent for malls in the 21st century. 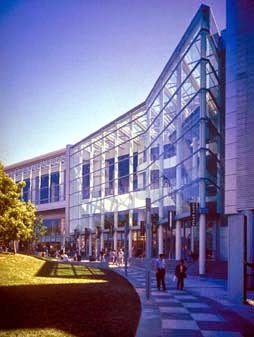 The basic organization places the theaters, which require no daylighting, to the west, thereby creating a street wall in tune with the adjacent neighborhood. These solid walls are articulated with glass panels which, when illuminated from within at night, give a surrealistic glow reflected by surrounding buildings. Retails spaces at the ground floor help to create scale and bring people inside, and through, the building. A major circulation spine runs north-south the length of the building, overlooking the park through a transparent curtain wall, bending to follow the curve of the park. This simple, yet intelligent, solution of locating program and circulation helps to connect the Metreon to the park and its adjacent structures, breaking away from the typical inward focus and site ignorance of most malls. 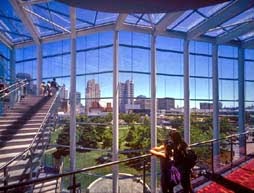 It is inside where the Metreon will have the largest influence. Opposed to the typical mall configuration of shops housed in definitive boxes perpendicular to a linear circulation spine, here the boundaries between the two are blurred. Much as the former finds its influence in the city (buildings oriented towards streets) the latter looks to changes to modern life through information technologies, especially the popularity of online shopping. Moving through the Metreon is not like moving through a mall, it is a journey of discovery as circulation and shops lose their distinction to the point of confusion (How did I get in this store? Is this a store?). An example may help to clarify: one can walk directly from the Sony electronics store into a Hear Music store serving Starbucks coffee. The only symbol of an edge are the necessary shoplifting detectors. 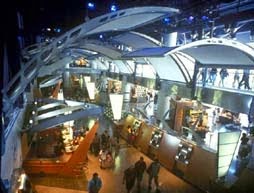 Finding itself with competition from online shopping, Sony's attempt to create a more lively and experientially rewarding entertainment complex/mall is successful, yet with its flaws. For example, sometimes the programmatic blurring can be too confusing (the ticket booth for the theaters are very difficult to find). This, and other, problems are inevitable when abandoning a typology's methods, in search of new solutions arising from new problems. It is only a matter of time when a new typology arises, which will look back on the Metreon the same way mall builders looked to the Southgate Mall, built in 1956.
Email Post
Labels: weekly dose