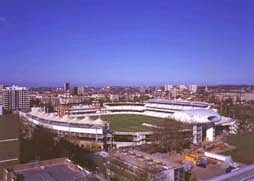 Recipient of the 1999 Stirling Prize (the highest yearly honor awarded by the Royal Institute of British Architects), the Natwest Media Center at Lord's Cricket Ground in London, by Future Systems, extend's the Marylebone Cricket Club's patronage of innovative architecture. Though, instead of a relatively public structure, like Michael Hopkin's well-known facing stands, the Media Center is limited to journalists. But where Hopkin's structures create space by providing shelter, the Media Center acts as an object to be seen by the public, either at the grounds or on television. The interior is secondary (though impressive): the strength of the design lies in its unabashed object fetish; a sensual, alien form landed on the grounds at Lord's. Future Systems publicized this structure as the world's first all aluminum semi-monocoque building, utilizing the same technology as boat-, car-, and airplane-manufacturers (actually built in a boatyard). With this construction method the interior is free of columns and provides unobstructed views to the field 15m below. Here form and structure are one and the same, as the skin of the building follows the curves of the structural members. In plan the curve acts as an extension of the cricket grounds, while in section it accommodates the west-faced inclination of the glass (to eliminate glare on the field). Aside from these site-specific and practical concerns the form is arbitrary, and the architects took this knowledge and created a unique, yet simple, design. 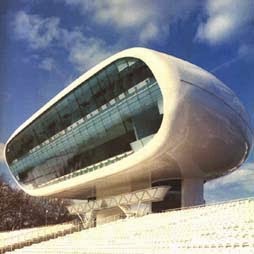 Inside, the Media Center is covered in a light blue color, the carpeting wrapping up the curved outer surfaces to become ceiling in certain areas, most evident at the rear. The plan is simple with service (elevator, stairs, and washrooms) and a small cafe to the east, and stepped rows of tables for journalists to the west, separated by a corridor overlooking the tables below. The womb-like interior is fascinating upon first entry, being enveloped by blue surfaces dotted with curved plastic furniture that mimics the structures form. A good balance is achieved between the inside and outside; the large glass wall attracting attention away from the interiors towards the field below. 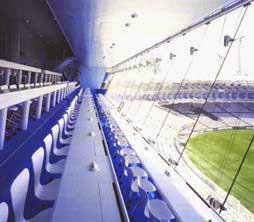 For many years Future Systems attempted to get their Archigram-influenced "blob" designs built at a large scale. This commission is the first to move from interior designs and single-family houses to a larger, and more noticeable, scale (with the attention generated by television broadcasts it definitely is the first of many). For Future Systems the major accomplishment is the discovery of a structural system to suit their formal desires. As their name implies, hopefully other systems will be integrated to raise their architecture above a purely formal response to a more-integrated architecture that responds to the major issues we will all face this century.
Email Post
Labels: weekly dose