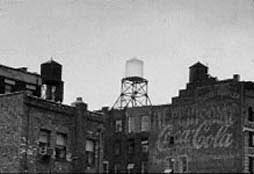 British artist Rachel Whiteread's first U.S. commission, Water Tower, is a translucent resin cast of a wooden water tank, raised seven stories above the streets of Soho. Recipient of the Turner Prize in 1993 (the first woman to do so) for her installation House, a concrete cast of the interior of a soon-to-be-demolished East London house, Whiteread continues her investigations into the relationship between art and urban society. Her reversal of matter and space in House gave the interior space a physical presence, a tangibility. Water Tower is not a simple inversion; its untouchable presence on the skyline provoking thought on it, and art's, place within the city. 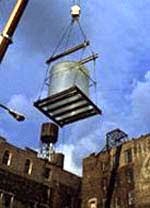 Erected from an old wooden water tank, reinforced with three-inch-thick walls, the resin tank sits between two working water towers, the inspiration for Whiteread's response. Shying away from obvious locations for public art, and the commotion at street level, a view from under the Brooklyn Bridge at the silhouetted water towers cemented her idea: a piece of public art that dissolves into the background structure of the city, while questioning how people relate to the(ir) city. Most New Yorkers may believe that the water towers dotting the city are ugly, but they are part of the architectural vocabulary of that place, and Whiteread's piece celebrates that fact. 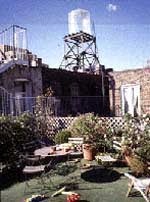 The 12' x 9' diam. monolith is easily a presentation of contained vs. container, though this conclusion is limiting. The poetic possibilities of the work are evident in these photographs, a quiet glimmer in the city's visual cacophony. The material is perfect for both proclaiming itself or disappearing based on the viewer's relationship to it, in terms of angle and distance, and the environment. And in relation to much public art that is produced for cities Water Tower confuses the standard that public art must be an object in a space (think Picasso's famous sculpture in Daley Plaza in Chicago), as it is just that while simultaneously being the opposite. 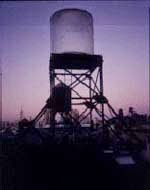 Of course the piece is material and does occupy space, indicating that one of the most important aspects of its brief existence (unfortunately the Water Tower came down in mid-2000) is our relationship to, and perceptions of, it. And if Rachel Whiteread's goal was to push people to think about their surroundings in new and different ways, then the long-term effects are almost limitless.
Email Post
Labels: weekly dose