The following text is an excerpt of Flyover Country by crop artist Stan Herd, featured in Oz Volume 19. 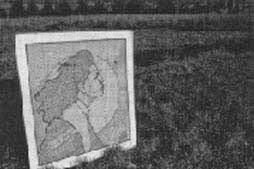 A Kansas farm child discovers the world one small intimate detail at a time. When encountered for the first time, a sparrow is as fascinating as the universe. Without majestic mountains or postcard sea coasts for comparison we are forced to focus on subtle detail. Early memories of summers spent roaming the cottonwood strewn valley we call "the pasture" just up over the rise west of our farmhouse are still vivid. Those adventures reveal an abundance of discoveries unending in their uniqueness. 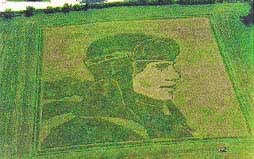 Each season brings new creatures to bluff creek sandbars which trickle through the valley most of the year. Particularly hot dry summers find the stream disappearing altogether except for an occasional deep hole where disappearing livestock and wild animals shared dwindling resources. Every few years a rumbling flood of water rushes down from the north depositing crooked limbs and an odd assortment of debris high up on the ancient cottonwoods.

A prairie is a natural ecosystem, which has evolved over the millennia, with grasses the most visible species. Teachers like prairie plant specialist Kelly Kindsher remind us that we are driving past things we should know something about. [Farm researcher] Wes Jackson suggests that "we cannot know what we stand for, until we know what we stand on." 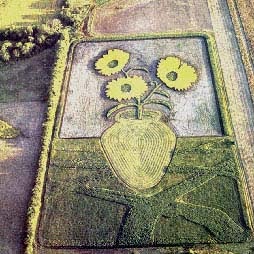 To date I have been unsuccessful in pursuit of the second portrait in the series. In the few years since the first work I have heard stories of at least two tribes of native people whose time is running out, one in the South American Amazon and the Kaw tribe, native to Kansas, with only two old men of full blood left.


Like many of you, I am hopeful that my work makes some difference. I am less strident in presuming that my art can change the world. I am, however, left with one simple conclusion -- that art, agriculture and architecture all have in common a need to mine the "essence of place": to fully understand place and to ethically manipulate it. It takes great commitment to view a meadow of native grasses with the focus of a child...one intimate detail at a time.
Email Post
Labels: weekly dose