The following text and images are by The Renzo Piano Building Workshop for their Peek und Cloppenburg Department Store in Cologne, Germany, currently under construction. 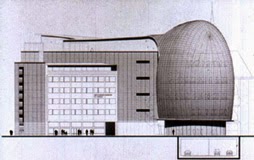 The German chain store Peek und Cloppenburg was looking to set up a new commercial space in the center of Cologne, near the city's cathedral. Our client already had a reasonably clear idea of the type of building it wanted to construct: it should evoke a close association between glass and wood, along the lines of the IBM traveling pavilion. 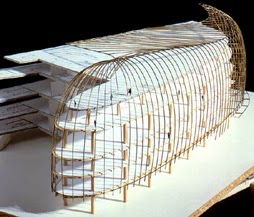 The store (covering a surface area of 22,000 square meters, including 15,000 m² of public space) will be located in a somewhat "rough" and congested urban area. Currently, the project site is occupied by a large highway that will eventually be underground, and above which the building will be constructed. 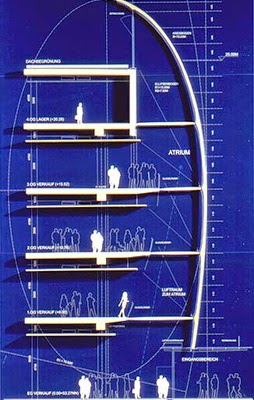 The building will have two parts: one rather classical, cubic in form, and the other being a huge, 5-story glass nave. Inspired by the orangeries, greatly popular in the 19th century, this glass house will borrow its principal elements from these historic models. The main structure will consist of vertical wooden beams, spaced 2.5 meters apart. Between each beam strips of metal will support the glass. The roof of the glass structure will be much lower at the center of the building, to avoid rivaling a neighboring church. The curvature of the site will leave enough space in front of the church to create a public square. 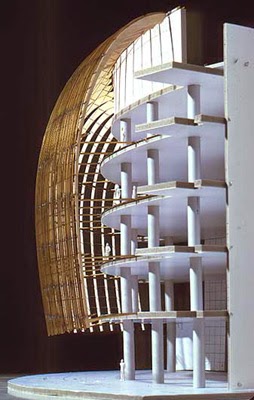 The transparency and lightness of the overall structure, and its virtually diaphanous quality, will contrast with the rest of the district, while hopefully rendering it less oppressive.
Email Post
Labels: weekly dose