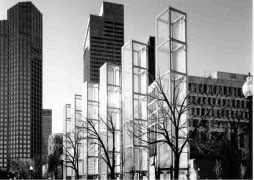 Ironically in San Francisco, a city known for its progressive attitudes, controversy has arisen over local architect Stanley Saitowitz's Yerba Buena Lofts, a stacked condo development of cast-in-place concrete, glass and industrial-grade steel on Folsom Street, south of Market. The design updates the Victorian context of bay windows into contemporary materials and methods, much to the public's chagrin. But before the loft project was even an idea, Saitowitz had completed a commission in another city known for its conservative aesthetics, Boston; the New England Holocaust Memorial in Carmen Park, near City Hall. The gap that exists between the acceptance of the Memorial and the rejection of the Lofts lies in Americans' attitudes towards the built environment: contemporary ideas can seep into the markers of our time and mortality, but not into our daily lives. 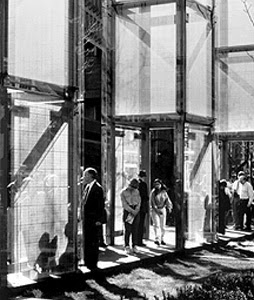 Maya Lin's winning design for the Vietnam Veteran's Memorial, off the Mall in Washington D.C., helped to create an acceptance for abstract art as a conveyer of emotion over literal historicism (a short-lived acceptance with the recent World War II Memorial design). The reflective granite surface brings the living and the deceased (or M.I.A.) together in the simple, recessed type, often used for rubbings and always touched lovingly with outstretched hands. Although a controversial design at the time of its selection, and subsequent unveiling, the Memorial has become a strong symbol associated with the Vietnam conflict and an important part of the healing process for family and friends of victims. 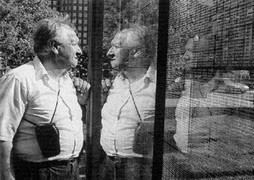 The Holocaust is an event that is being memorialized in many countries around the world as the gap between past and present grows and more Holocaust survivors pass away. These memorials attempt to both mark a time and an event but also capture the intense emotions of what is seen as the worst undertaking of modern man. The most well-known, and successful, structure to commemorate both the victims and survivors of the Holocaust is Pei Cobb Freed & Partners' United States Holocaust Memorial Museum in Washington D.C. Much of its success at moving the visitor is the large amount of personal images and paraphernalia, which combine to overwhelm our senses but also tell us about each life taken, their hopes taken in a senseless act. In the process we come face to face with our own mortality and are reminded of the fragility and brevity of human life. 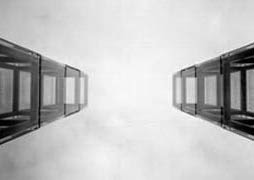 Stanley Saitowitz's design for the New England Holocaust Memorial is best described in these quotes by Elie Wiesel:


Look at these towers, passerby, and try to imagine what they really mean - what they symbolize - what they evoke. They evoke an era of incommensurate darkness, an era in history when civilization lost its humanity and humanity its soul . . .
We must look at these towers of memory and say to ourselves, No one should ever deprive a human being of his or her right to dignity. No one should ever deprive anyone of his or her right to be a sovereign human being. No one should ever speak again about racial superiority... We cannot give evil another chance.
Email Post
Labels: weekly dose