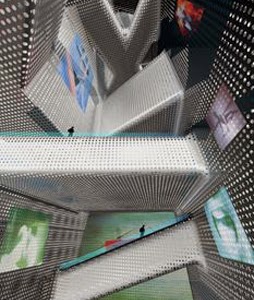 Featured here are the three finalists to build the new home of Eyebeam Atelier, a non-profit organization "established to provide access, education, and support for students, artists, and the general public in the field of art and technology." The finalists include New York's Diller and Scofidio, Leeser Architecture, and Dutch firm MVRDV (left). The following text and images are courtesy Eyebeam Atelier. 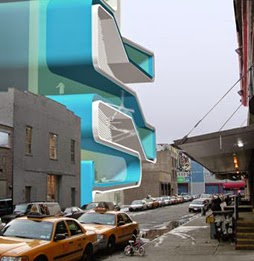 Diller + Scofidio (now Diller Scofidio + Renfro) is a collaborative, interdisciplinary studio involved in architecture, the visual arts and the performing arts. The team is primarily involved in thematically-driven experimental work that take the form of temporary and permanent site-specific installations, multi-media theater, electronic media, and print, as well as architectural commissions. 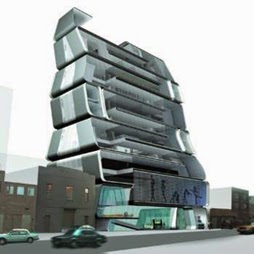 Leeser Architecture (above) understands architecture as a form of research; a complex form of cultural expression directly linked to socio-economic and cultural tendencies, changes and flows. Media and technology have produced an unprecedented cultural shift, requiring a rethinking of the methods of production. In this culture of speed and image overload, new technologies and the ubiquity of media and information are the forces that blur the boundaries between public and private domains, between domestic and urban events and environments. Architecture, traditionally a discipline resisting change, needs to jump into this vortex in order to remain valid. 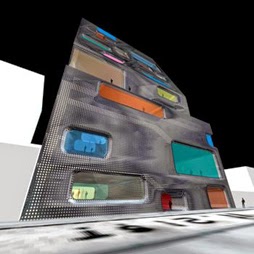 MVRDV (above) is an office based in Rotterdam that produces designs and studies in the fields of architecture, urbanism and landscape design. MVRDV was founded by Winy Maas, Jacob van Rijs and Nathalie de Vries in 1991 after they won the first prize in the Berlin Europan Competition. Early projects such as the Light Urbanism study for the Municipality of Rotterdam, the headquarters for Public Broadcasting Company VPRO and housing for elderly Wozoco's in Amsterdam brought MVRDV to the attention of a wide field of clients and gave them international acclaim.
Email Post
Labels: weekly dose