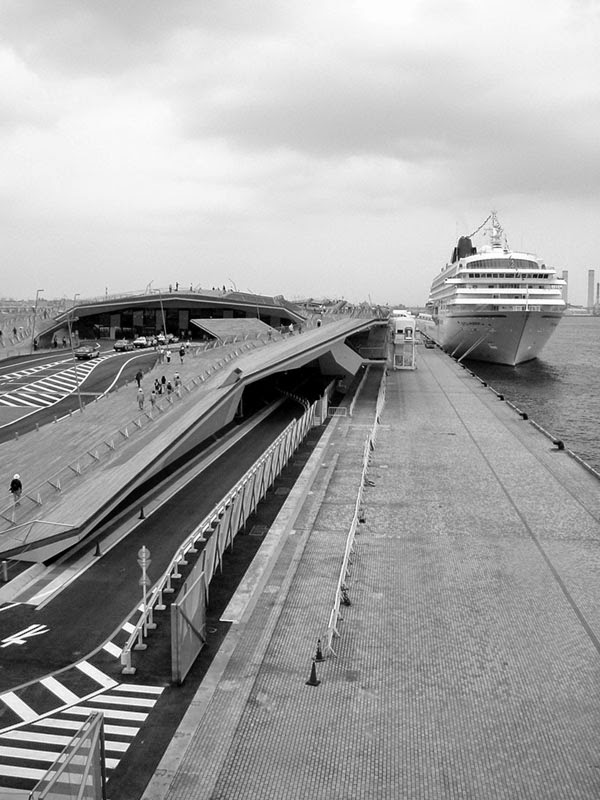 In 1994 London's Foreign Office Architects won an international competition for the Yokohama Port (now Ferry) Terminal in Yokohama, Japan. The innovative design treated the terminal as landscaped surface, both inside and outside, acting as an extension of a nearby park. With its recent opening, coinciding with the finals of the 2002 World Cup games, the terminal is one of the first large-scale built works of "architectural landscape" spawned by recent advances in computer technology. 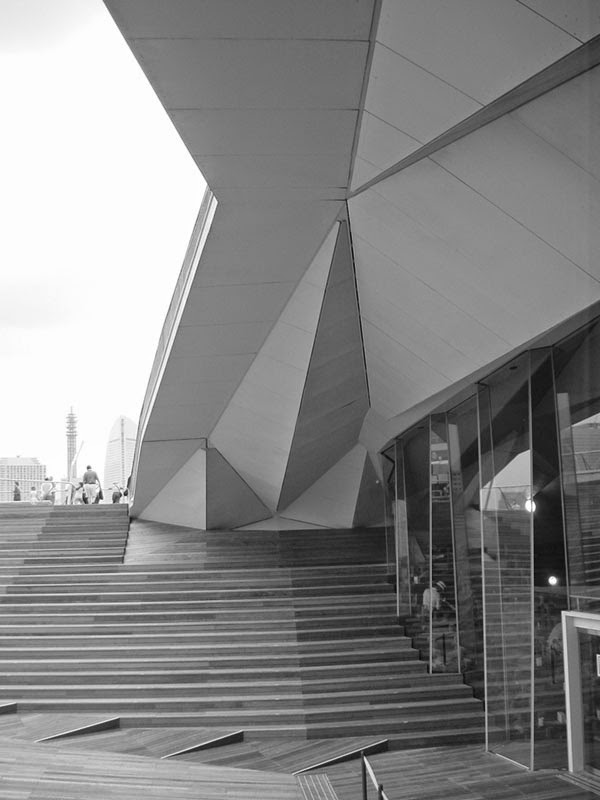 Positioned on an existing pier along Yokohama's waterfront, the architects envisioned the building as a chained sequence of movement. One's experience would differ on each visit since the design strays from a linear, back-and-forth movement typical of most piers. In fact ten ramps vertically link the terminal and the park, almost forcing a different route on each visit. The 70x430m terminal locates arrival and departure facilities, with restaurants and shops and meeting rooms, inside while also placing a park on the roof above. Essentially, spaces for travelers are housed in the shallow space under the roof, while a public space is provided for visitors to the city and the local population alike.

Obviously the most overt aspect of the project, the park exists on a typically unused surface, the roof. 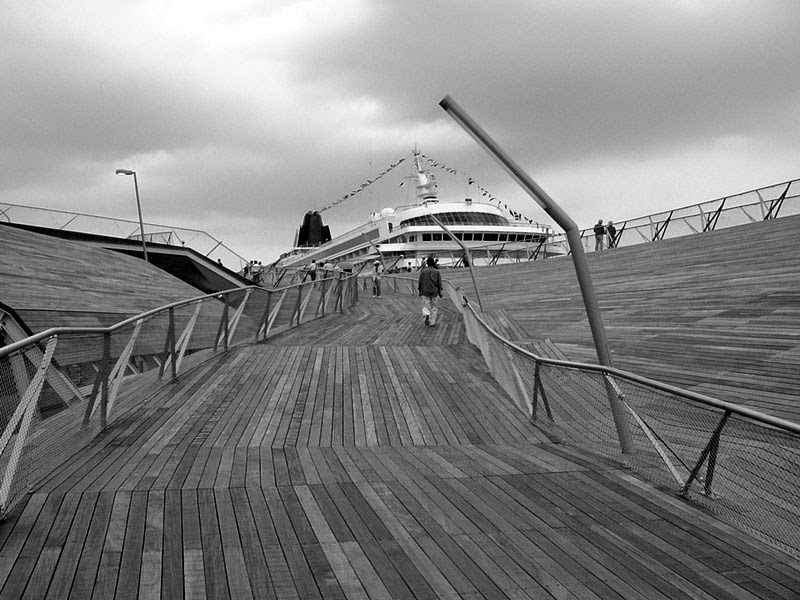 Instead of treating the roof as leftover from interior spatial articulation - common in most buildings - the architects create a dynamic interplay between its surfaces and the spaces below. In between, the steel frame structure - resembling a spine traveling the length of the pier - changes its profile to accommodate the terminal's program while simultaneously providing a rich park setting above. Spatial continuity results from the structure's melding of inside and outside, resembling a flow diagram solidified into architecture. 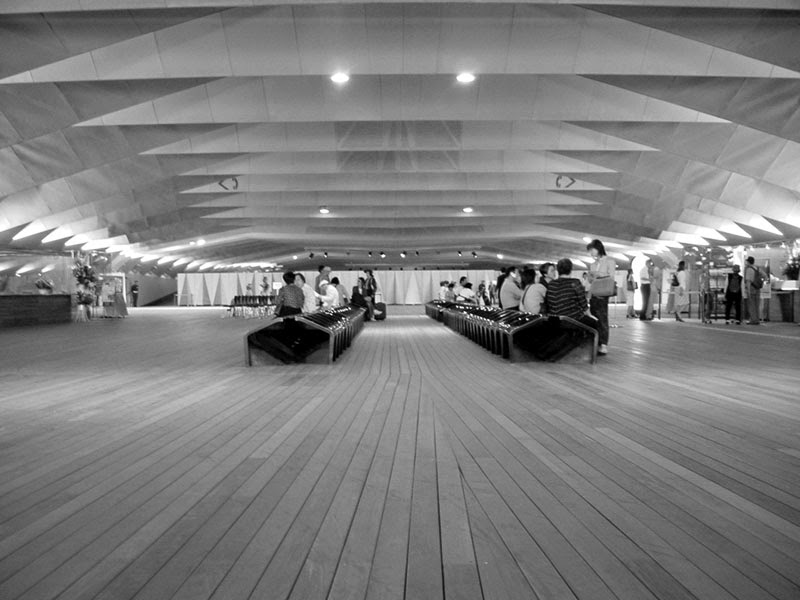 Terminal spaces are shallow and long, this unfortunate situation a product of their location between the park above and parking below. The oppressive, heavy feel of the interior, coupled with the placing of certain functions into boxes that don't relate well to the flow of the spaces, are the only glaring shortcomings of the terminal. The column-free spaces are articulated by a folded ceiling spanning perpendicular to the terminal's direction, reinforcing the idea of a spinal column along the building. Relating to the park, the Brazilian ipe hardwood flooring matches the exterior, weathered surfaces.

The themes of roof-landscape, flow and surface are interdependent with the use of computers. 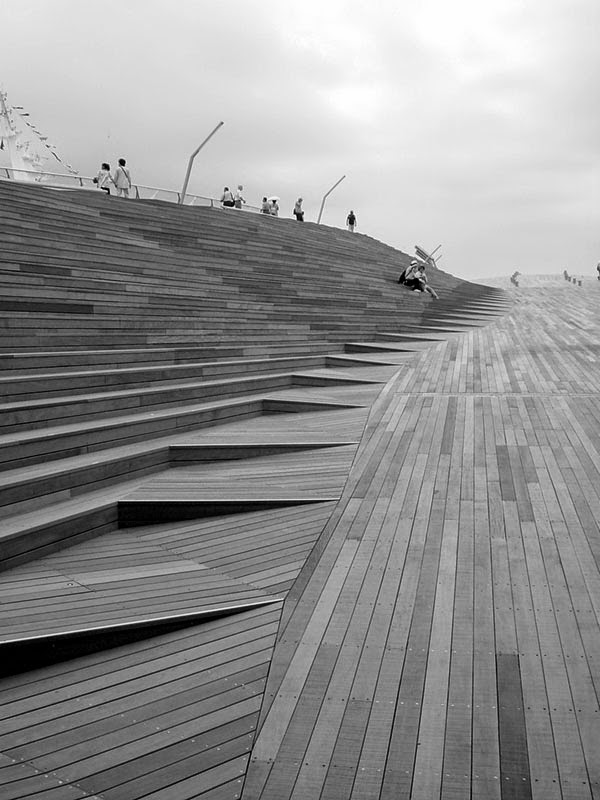 Sophisticated modeling and drafting software enable designers to shape surfaces and forms from various types of information. The same software is used to fabricate the different parts of the building, from the structure to the surface. Foreign Office Architects exploited the possibilities of the computer in their design of the Yokohama Ferry Terminal, giving other architects the confidence to attempt such daring. But it is the greater consideration of providing usable public space for residents that sets the terminal apart from other recent, high-profile architecture. In a sense the building transcends its role as terminal to become an urban landmark for the city and its people. 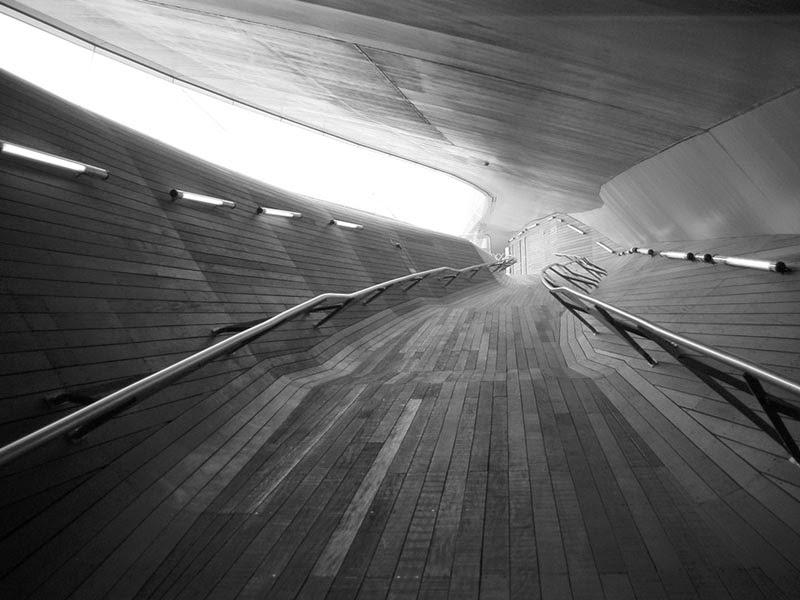