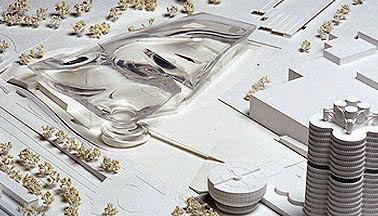 Following an example set by German counterpart Volkswagen, BMW held a competition in 2001 for the BMW Welt, which will give customers the opportunity to "collect their dream BMW themselves." The competition for the site adjacent to the car company's Munich Plant and Museum, as well as Frei Otto's Olympic Park, drew entries from all over the world with 27 finalists including Asymptote, Wiel Arets, Morphosis and MVRDV. BMW chose Coop Himmelb(l)au's design for the Event and Distribution Center, to be completed in 2005. 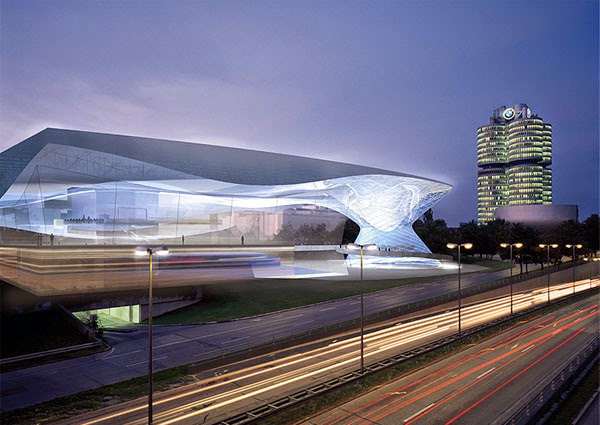 Coop Himmelb(l)au's design features four elements - Landscape, Cloud, Double Cone and Spiral Ramp - that act to unite the four general parts of the program: Reception, Forum (art, science, and cultural auditorium), Brand World (the "vision and fascination of BMW") and Delivery Area. The Austrian firm's design was chosen as much for its ability to create a unified composition as for its ability to convey innovation through its aesthetics. Here architecture is seen as corporate image-making, something BMW is familiar with, with its 1972 BMW Tower and 1980's Research Center, each with designs indicative of their respective times. 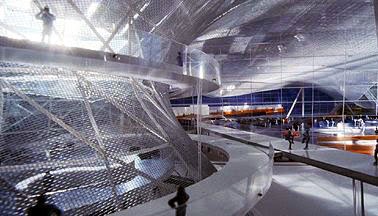 Each program element is contained underneath a continuous roof that originates from an oft-used Coop Himmelb(l)au formal device, a pinched cylinder at the corner of the site. Ramps circle the pinched cylinder, helping to unite the various program elements through visual experience and movement, aided by the high degree of transparency present in the design. 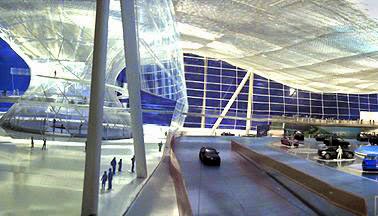 To quote the winning architects, "The task set in this competition offers the opportunity to create a design that merges and hybridizes areas that in the past have been strictly separated at the interface of different structures of the urban landscape." By using computer technologies, as many of the other participants did, their design is able to blend the unique components of the program into a unity through surface articulation (roof) and pedestrian circulation (ramps). Ironically the ramp system imitates (intentionally?) the movement of automobiles, though in this case removing the person from their old car to await their new one.