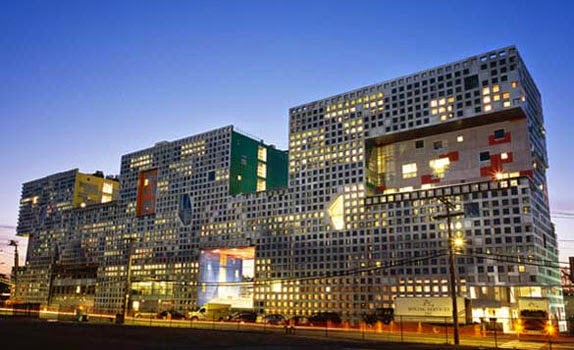 The newly-opened Simmons Hall, on the Massachusetts Institute of Technology campus in Cambridge, Massachusetts, is part of M.I.T.'s ambition to impart unique contemporary architecture on their expanding campus. Including buildings by Frank Gehry, Kevin Roche and Fumihiko Maki, Steven Holl's undergraduate residence hall (with Perry Dean Rogers Partners Architects) stands out with its conceptual clarity and brazen imagery. Envisioned with the idea of "porosity", the building is seen as part of the city and campus form, slices of each stacked ten stories tall and almost 400 feet long. 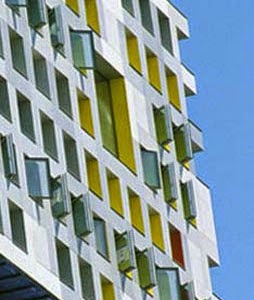 Both in plan and section, the building is composed of two types of openings: five large-scale openings that correspond to entries, views and outdoor spaces, and over 3,000 small-scale openings acting as windows. Each of the 350 dorm rooms looks out from an amazing nine windows! Built with a "perfcon" structure, each opening is 2 x 2 feet and 18 inches deep, allowing for winter light to enter while shading the rooms from the summer sun. A number of these smaller openings connect to the interior and act as the "lungs" of the building, drawing air into and up through the building. The image at left illustrates the different colors applied to the head and jambs, creating identity for each "house" within the overall structure. 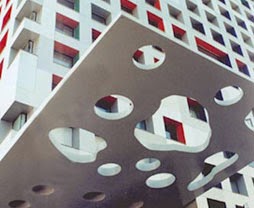 Internally the building is as complex as its exterior. Wide corridors connect the dorm rooms and the building's amenities: dining, fitness center and a theater, among other facilities. Eight atria connect the floors vertically in a manner more flowing than rigid, contrasting the regimented exterior. The combination of circulation with dorm rooms and ancillary functions is the primary programmatic solution that reinforces the notion of the building as a slice of the city. Parts of the city are lifted into the building and inserted next to internal streets, for use by students and their guests, in effect making the building a contemporary re-interpretation of Le Corbusier's Unite d'Habitation in Marseilles, France. 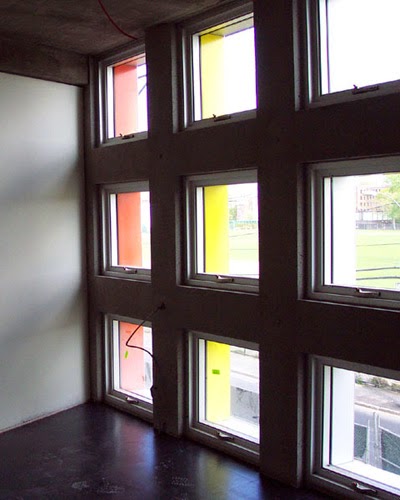 In Simmons Hall, which opened to residents recently, architect Steven Holl successfully continues to translate conceptual ideas into impressive buildings that can stand alone without knowledge of their impetus. But the strength of his designs allows the observer to discover the ideas: here the large and small openings speak of the building's porosity, while the internal interactions act as a micro-urban condition. Aside from the building's praises as a stand-alone object, it is a part of a larger whole; it is part of a campus and a city. In reflecting the greater condition into which it is inserted, ideally Simmons Hall will give back to M.I.T. and Cambridge through its quality spatial and interactive experiences.