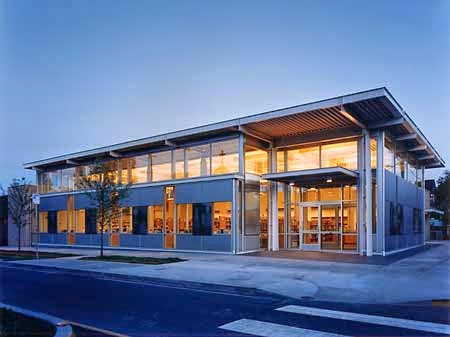 Located on a highly visible corner in a commercial area of Portland, Oregon, the Woodstock Library, designed by the city's Thomas Hacker Architects, is a simple, yet rewarding, neighborhood library. The architect's goal was to create a "feeling of openness and availability", achieved through the integration of structure and architecture into a cohesive whole. 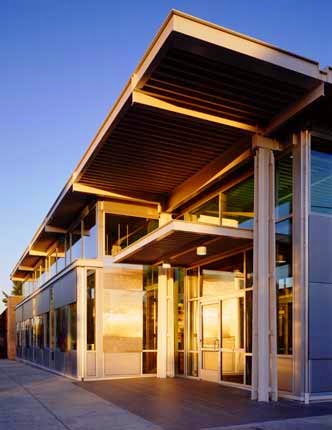 Openness is an idea well suited to a library, an institution celebrating freedom of ideas and access to those ideas. But openness, or its familiar architectural metaphor - transparency, is not well-suited to the primary material of the written word, books. To prevent the adverse effects of sunlight, the architects provided deep eaves above the expansive clerestory windows, the latter achieved by cantilevering the exterior wall's structure from interior columns. 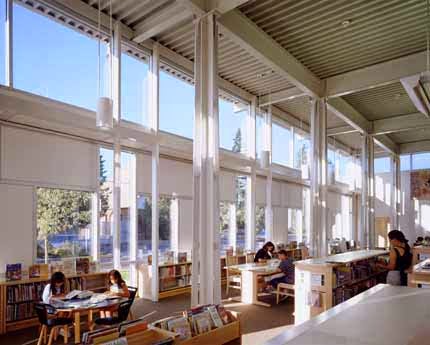 The airy and light-filled interior definitely follows the architect's wishes, in a space stripped to its bare architectonics. Irregular-shaped openings below the clerestory and articulated columns, though, help to give the space a sense of scale. 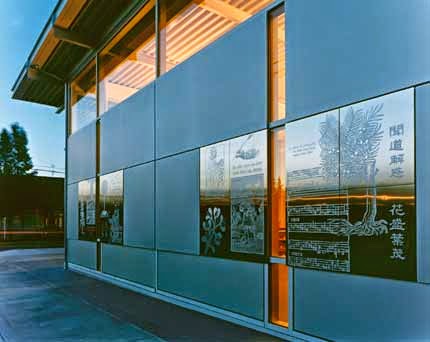 In a unique touch, the architect incorporated stainless steel panels, set within the aluminum facade, etched with images illustrating the written (and printed) word's history. This feature sets the library apart from others, since in effect it makes the building an architectural book telling a story. The visitor can circle the building and interact with it on a level beyond what is typically achieved, reminiscent of old ecclesiastical architecture which used wall paintings to tell the history of man to the, ironically, illiterate masses.
Email Post
Labels: weekly dose