The following text and images are courtesy architects Shai Yeshayahu-Sharabi and Maria Del Vera. Click on images - by Lider Garcia and Shai Y-Sharabi - for larger views. 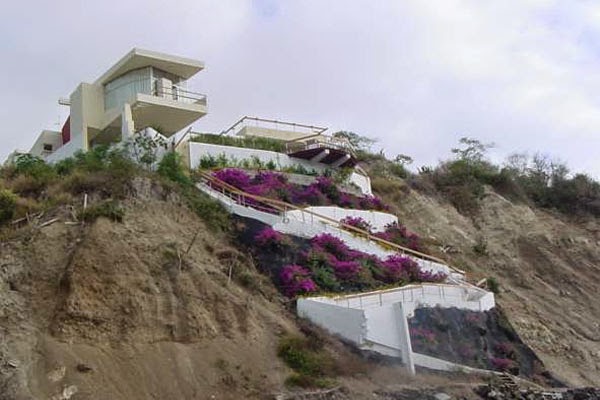 The occasion to build on the Pacific Coast at -1º lat. 81º long. and present the city and our client with a constructive solution that safeguards the coast's finite resources was an inaugural moment for the region and our work. It ignited a rigorous analysis of the site's specificities, indistinctive of country, yet very distinctive of it's local geodetic address, revealing that prolonged droughts, extended rain periods, excessive heat waves, strong oceanic winds and constant tectonic movements are the most impacting elements that deform local terrain. Consequently, being site specific in geophysical terms confronted us with the realization that at Alta Mar, a fusion of diverse building methodologies utilizing imported, conventional, and local technologies would allow for the simultaneous coexistence of independent and dependent systems to define the outcome. 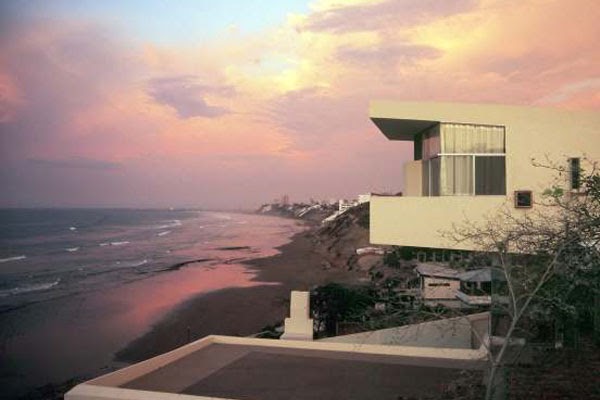 Hence, at the ocean side, we sculpted the hill and formed a zigzag pathway similar to those used by ancient Incas for irrigation. We spread a high-tech fabric matrix over the terrain and anchored it with bamboo-adobe walls to make a flexible and porous skin that acts as a catalyst capable of controlling erosion and maintaining a collection of local plants, giving the city its first garden along the coast. Formerly, retaining walls were exclusively constructed out of concrete that was technically inadequate, isolated the beach from public use and depleted the area of endangered flora and fauna. The introduction of the new retaining technique addresses the fact that this earth needs to be in constant movement and receive nutrients in order to generate oxygen and restore fertility to the soil. 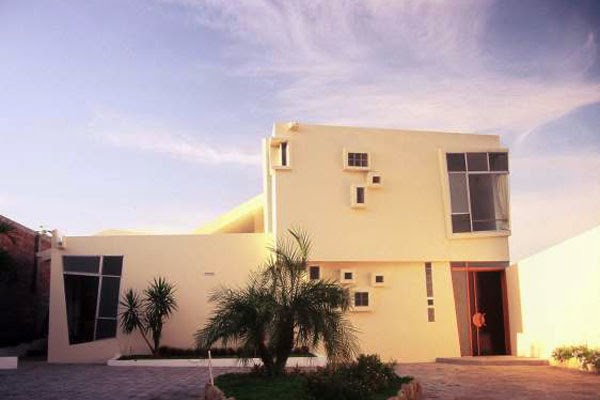 The design of the house pursues this same strategy of experimental flexibility and magnifies how adequate distribution of natural elements such as sunlight, prevailing winds, soil conditions and water availability, influence its foot print. Here, unlike known villas of the past contained inside a box, Alta Mar's program is fragmented. Objects extending towards the gardens denote the spatial ambiguities between interior and exterior rooms which accentuate the dispersed shifts. The use of independent structural entities minimizes stress during seismic movement. As a result, enhanced optic frames transcend layers of rooms maintaining constant visual contact with the ocean, land and the magnificent city contours. Most built work uses building methodologies and technologies to defy geophysical aspects. We embraced them and have adopted this as a tool to build in favor of an integrated living environment.


Comments from the client:
As an economist impacted by social, cultural, and environmental instabilities, it is a pleasure to own a house that services my immediate and extended family, the city and our planet. 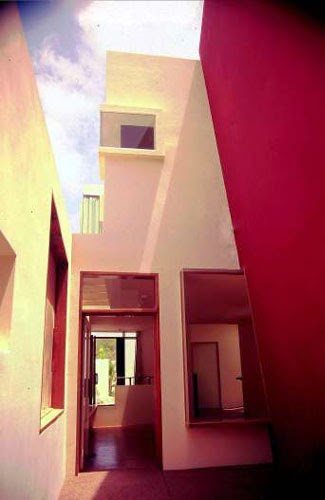 For years, my wife and I were reluctant to build on this site. We wanted more than a comfortable place to live in. Today, after two years of enjoying our home and collecting revenues from banking on a great ecological investment, we are constantly aware that it is this and more. Imagine, by inhabiting it, we have become part of an earth-loving machine. Our waste is recycled and redeemed to nourish the gardens that help control erosion, beautify the coastal line and nourish our bodies.


Inside, we constantly move through light, sky and framed views, prominently placed throughout the house to compliment our daily activities, recreate the passing of time and reduce electrical consumption. 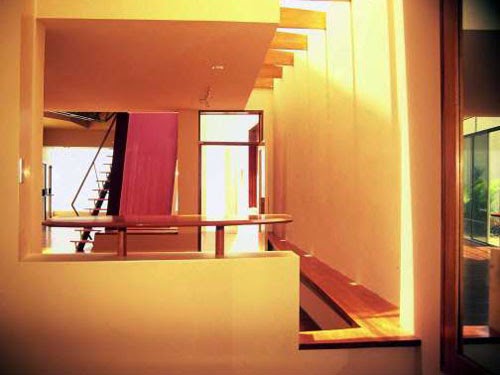 The success of Alta Mar is a model to build from. People constantly photograph the beach garden. Architects and students of architecture come to study it. Our municipality honored it with the city's most reputable award "Premio al Ornato" and we take great pride that this is our home.
Email Post
Labels: weekly dose