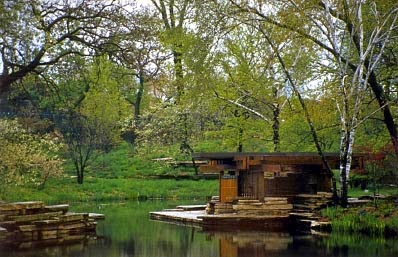 Local firm Eifler & Associates Architects (with landscape architect Wolff Clements & Associates) received a 2003 Design Excellence Award from the Chicago Chapter of the American Institute of Architects for its restoration of the Alfred Caldwell Lily Pool (formerly the Rookery) in the Lincoln Park Zoo on the north side of Chicago. Designed by landscape architect Alfred Caldwell in the 1930's, the Lily Pool consists of two interlocking pavilions overlooking the water with paths meandering between indigenous plants and entry gates. 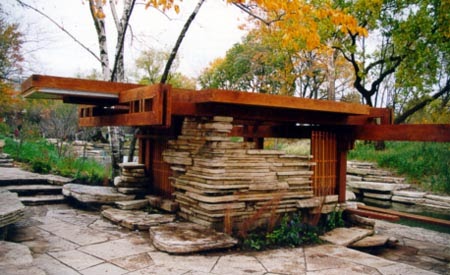 Since its completion, the pavilions have undergone various renovations, including roofing repairs and changes and reparations and replacement of the framing. This patchwork of fixes disappeared as the architects restored the pavilions to their original forms, subtly reminiscent of Prairie School architecture but devoted to blending with the Midwestern landscape of its setting. Their limestone walls appear to be built from the limestone ground they sit upon, the same stone of the water's edge. The wood framing of the pavilions blend into the surrounding trees regardless of the season, particularly the autumn when the burnt leaves come closest to the wood's color. 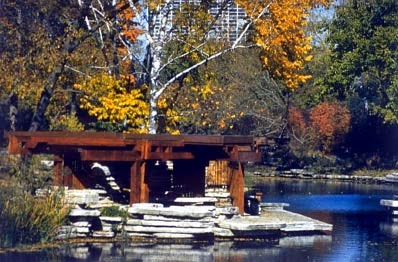 In Chicago in the early 20th century, like many other cities in the Midwest, nature was dwindling because of human settlement and a lack of sensitivity and understanding for the unique aspects of the regional landscape. Motivated by this change, Caldwell approached landscape architecture as a means for humans to appreciate the natural beauty of their surroundings via conservation of the indigenous landscape. The Lily Pool became an urban oasis, a place for serene introspection in the midst of the city's bustle. Not only could people appreciate the water, trees and flowers, but also the birds that were attracted to the food plants and weedy vegetation. 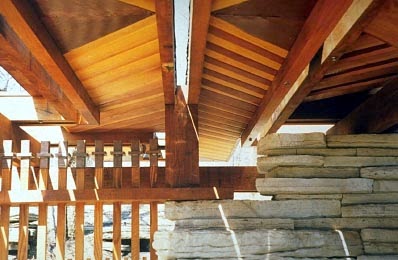 Almost 70 years since the completion of Caldwell's design, the pace of human settlement is even quicker, but appreciation of nature is growing as well. Regionally, prairie style gardening is popular as people grasp the beauty of indigenous plants over manicured lawns and fertilizers. Chicago's City Hall boasts a green roof and even bees whose honey was auctioned to raise money for a local art's program. And all year long people can visit the rededicated Lily Pool, whose restoration and improvements may extend the reach of Caldwell's ambitious vision to generations in the 21st century.
Email Post
Labels: weekly dose