Movie Wars: How Hollywood and the Media Conspire to Limit What Films We Can See by Jonathan Rosenbaum
Chicago Review Press, 2002
Hardcover, 240 pages 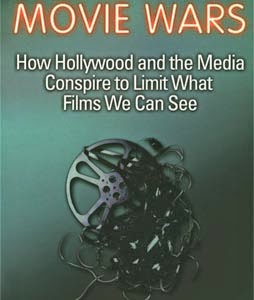 As head film critic for the alternative weekly paper the Chicago Reader, Jonathan Rosenbaum is in a position where his taste dictates the majority of the films he reviews rather than an editorial staff (heavily influenced by Hollywood studios and popular media), typical of the mainstream press. This fortunate position informs much of his criticism and the theme of this book, a collection of essays centered around the public's access to films. The most blatant example of censorship by Hollywood that Rosenbaum exposes is Miramax's purchase of distribution rights, and subsequent shelving, of foreign films, ensuring their competition will not purchase them but also keeping these films from the public. Other topics include the supposed death of cinema, Hollywood isolationism and the American Film Institute's "contribution to movie hell". Rosenbaum's writing is clear and inviting, making up for a depth of film history that is beyond most readers and personal taste that is at odds with much of the public (he places Small Soldiers well above Saving Private Ryan as film art). By the end of the book, though, the reader has learned something about film and been exposed to film references that lie outside popular media, hopefully leading to renewed interest in film as an art form and a cultural disseminator.