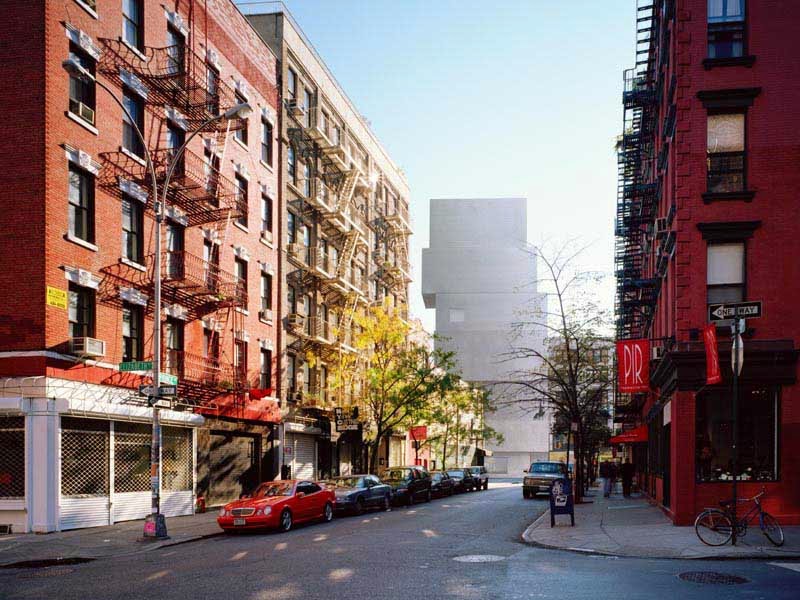 In May 2003, Japanese architects SANAA (Kazuyo Sejima + Ryue Nishizawa) were announced as the winner of a limited competition to design the New Museum of Contemporary Art's new home on the Bowery in New York City. Located at 235 Bowery opposite the terminus of Prince Street, the structure will be the Museum's first freestanding building (it currently occupies three floors in the historic Astor Building in Soho) and downtown's first art museum in recent history, upon its completion in Spring 2006. 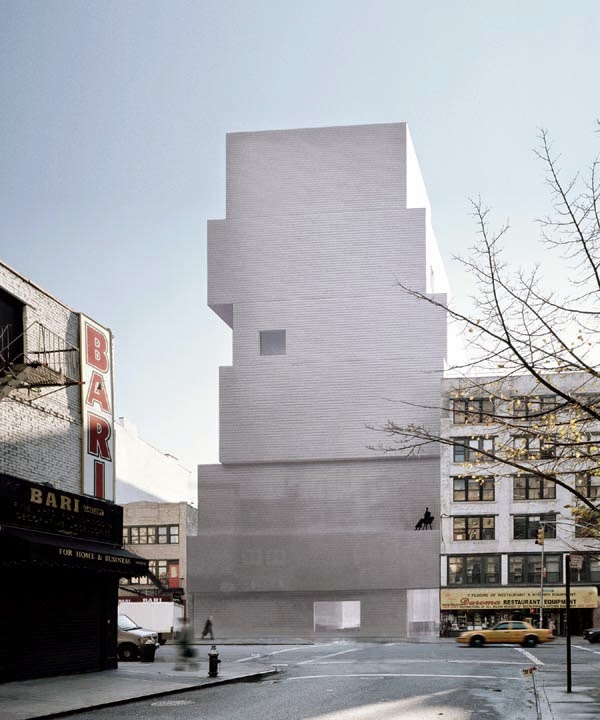 Founded in 1977, the New Museum has grown to become one of the leading contemporary art institutions in the city (if not the United States). Since its inception it has changed exhibitions spaces numerous times, each time gaining additional square-footage and exposure. In its current location, on Broadway between Houston and Prince Streets, the Museum's gallery spaces do not allow large-scale works to be presented, and its presence behind an historic facade does not give it a unique identity in the city. Its new home will double its size to 60,000 s.f. and, through SANAA's innovative design and minimal aesthetic, give the Museum its sought-after identity. 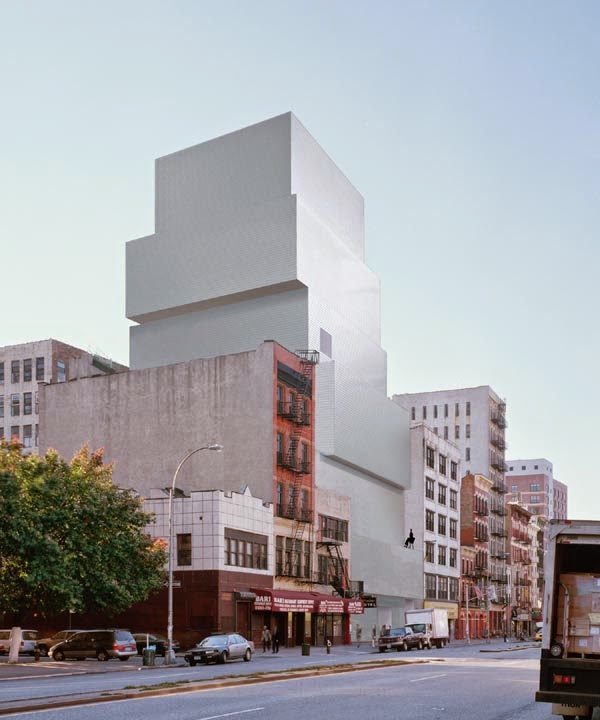 The New Museum's move to Broadway in 1983 coincided with the peak of the gallery scene in Soho, though since the artistic center of the city has moved to Chelsea. The recent competition for Eyebeam reinforces this center, but rather than following the crowd the New Museum is attempting to invigorate the Bowery, a zone bordering Chinatown, Nolita, the Lower East Side, the East Village and other neighborhoods along its length. Not necessarily part of any of these neighborhoods, the Bowery's reputation as a nexus for the homeless is evident by the Bowery Mission, two doors down from the site. Over time the Bowery has remained a relative constant in the ever-changing fabric of the surrounding neighborhoods, so the influence of the Museum is not a given but something to watch over time. 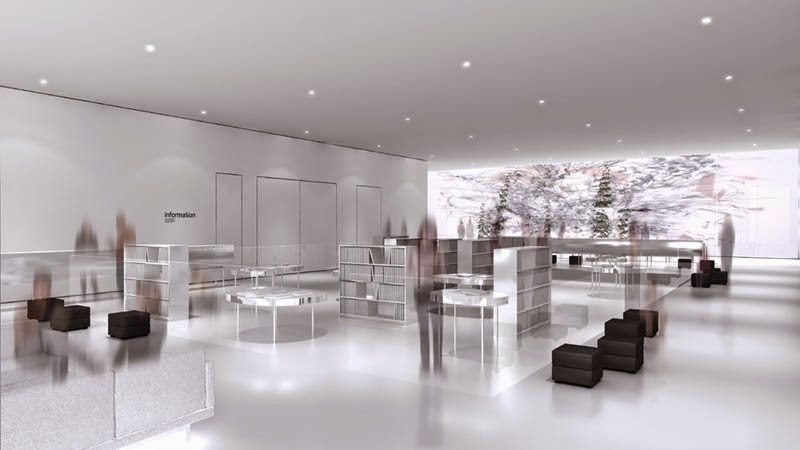 Currently surface parking, the Museum will occupy a 80-foot wide by 100-deep lot with two floors below grade and seven floors above (click the last image for lower-level plans). The transparent first floor facade will invite visitors to the lobby, bookshop and cafe on the first floor. A small gallery will be located at the rear of the site, naturally lit by a skylight above. Visitors can descend the open stairs to the media lounge and theater below (mechanical space and storage occupy the lowest floor) or take an elevator to the three exhibition floors located above the office space in the center of the building. Above the galleries is a learning center on the sixth floor and a multipurpose room on the seventh floor with wraparound balconies for views of Manhattan 150' above street level. 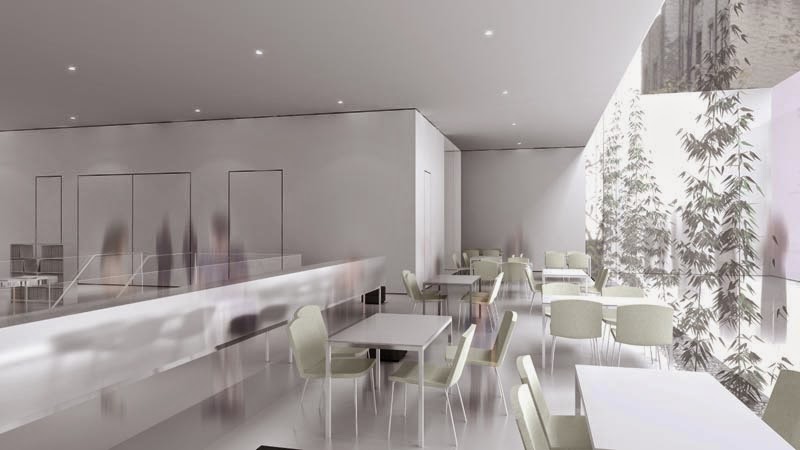 SANAA designed the building from the inside out, providing column-free, flexible exhibition space for the Museum, though this concern does not fully explain the unique exterior. To incorporate skylights to each gallery and the contextualize with the lower building of the Bowery, the architects shifted each floor in one of the cardinal directions to achieve these ends. With differing floor heights for the galleries (the 23'-high 4th floor will allow large-scale artwork) and other functions, the stacked boxes take on a random quality that energizes the building, appropriate to its location. The silvery galvanized, zinc-plated steel of the exterior will help the building stand out and give identity to the Museum, while also aging well so their presence on the Bowery will be lasting.


Although the design is brutal both in its mainly windowless exterior and its height - suited more to the Museum's program than its context - the architects excel at detailing their building in a way that gives them a lightness and transparency. How this method translates in New York City remains to be seen, but if the shimmering beauty of the new Dior Store in Tokyo is any example, the New Museum will be a beacon for art in a city known as much for its art museums as the art that they contain. 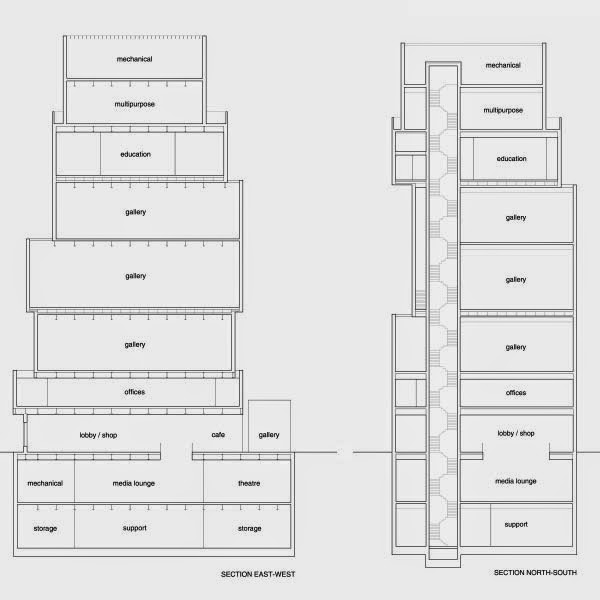