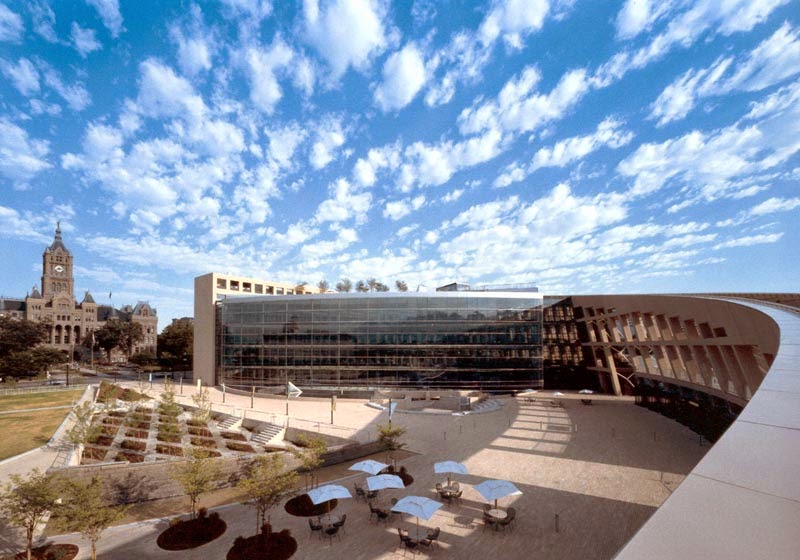 On January 6, the American Institute of Architects announced the recipients of twenty-nine Honor Awards, recognizing excellence in architecture, interior design and urban design. One of the sixteen buildings in the architecture category is the Salt Lake City Public Library by Moshe Safdie and Associates, known for his Habitat housing project in Montreal, Canada for Expo '67. While the quality of Safdie's architecture has definitely not waned in the years since that innovative design, his exposure has been more limited, though the library in Salt Lake City, Utah may change this. 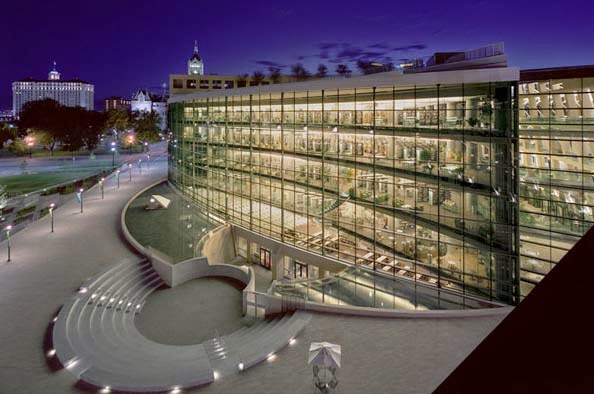 International architect Safdie - with offices in Boston, Toronto and Jerusalem - beat finalists Moore Ruble Yudell, Will Bruder and Gwathmey Siegel in a competition four years ago. Except for Siegel's design, each entry placed an importance upon the civic character of the building, creating generous outdoor spaces as front doors for the city's main library. What may have won the competition for Safdie is the clean composition - a five-story administration block next to the main triangular stacks with a curved "urban room and public piazza" formed by a curved wall that embraces the outdoor plaza while allowing views through to the Wasach mountains beyond. 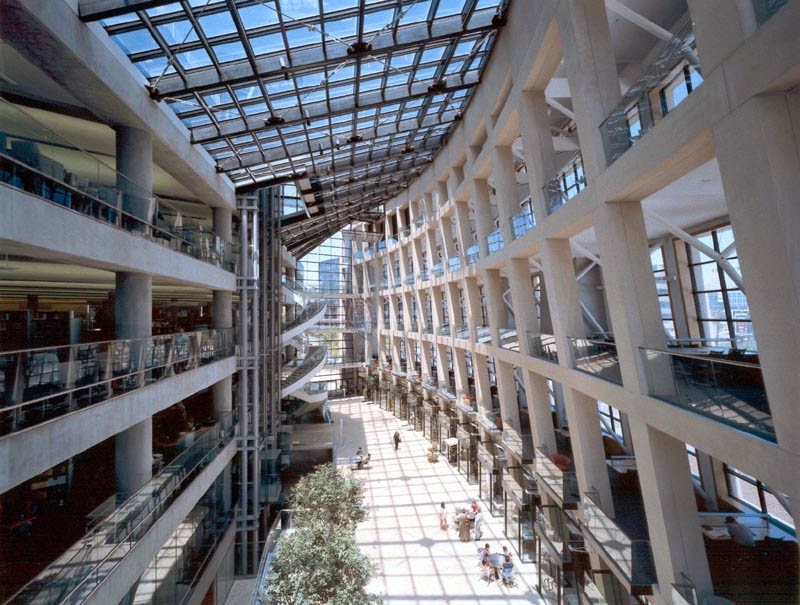 The building contains many dramatic features, primarily the glass-covered curved street that borders the stacks and contains vertical circulation. Interestingly, opposite the stacks sit reading areas for patrons, accessible by bridges, remote places for study with views of the mountains. In the space immediately adjacent to the outdoor plaza is a grand, five-story space, a continuation of the first-floor stacks. Formed by two glass walls, the space acts as a thermal barrier for the stacks on the floors above and as a monumental continuation of the space outside. 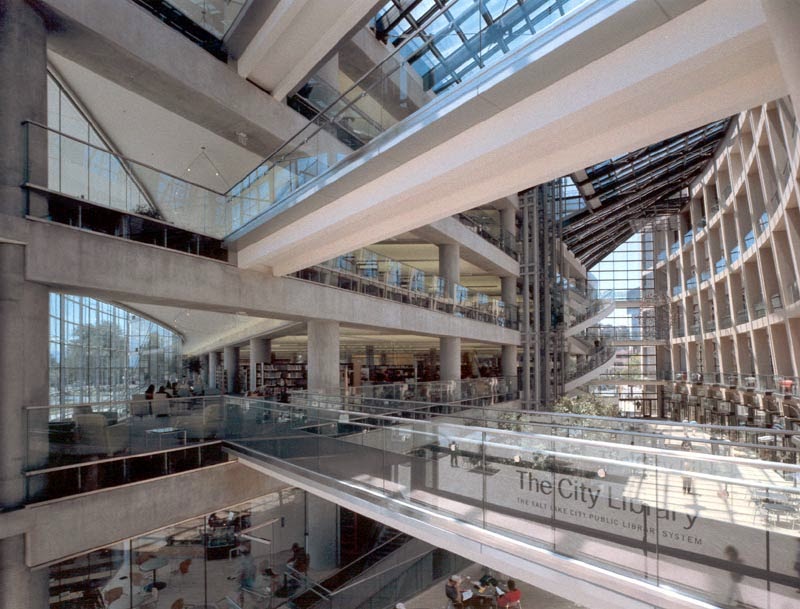 Safdie's design recognizes the civic importance of the library through its siting, composition and in its grand interior spaces, something missing from libraries like the Harold Washington Library in Chicago which neglect to balance function with civic appropriateness. Instead, the Salt Lake City Public Library, like Will Bruder's Phoenix Public Library, creates a variety of scales of spaces, from small and intimate reading areas to the grand spaces required for navigation and the recognition of the library's role in city life. 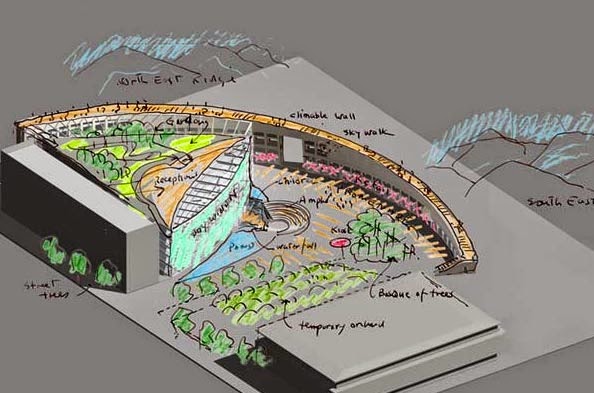 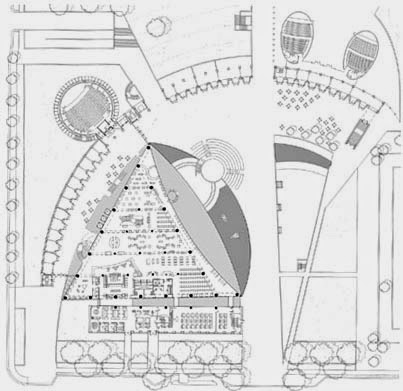 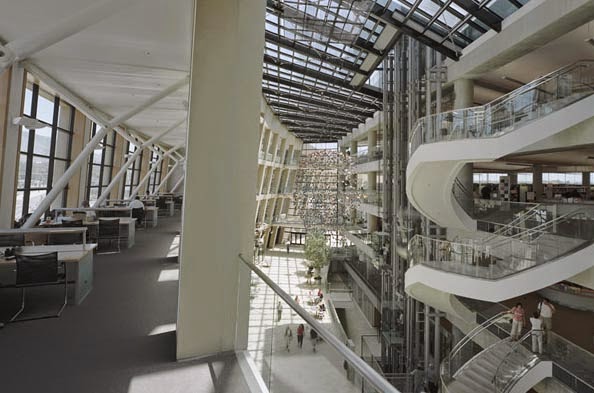 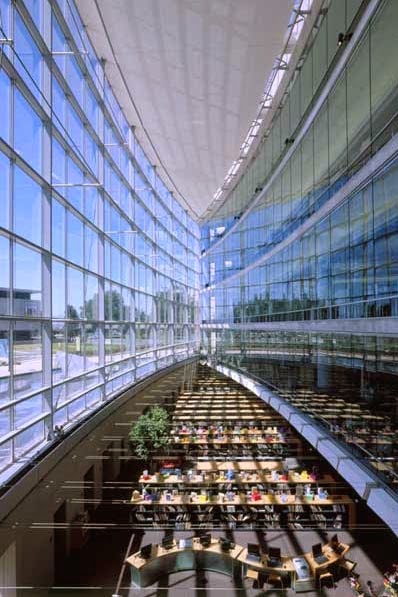