Square of the Patriarch

Square of the Patriarch in São Paulo, Brazil by Paulo Mendes da Rocha, 1992 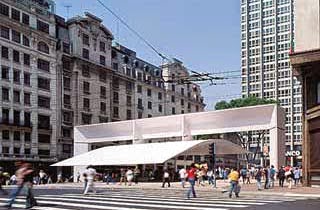 The Square of the Patriarch is an important place in São Paulo, Brazil. Its location makes it part of a connection between the old town and its new extension. So it seems appropriate that a project for the Square by Paulo Mendes da Rocha would be forward thinking while respecting the historical context of the city.

So far, from da Rocha's designs, the mosaic pattern on the floor of the Square and a canopy covering an underground entrance to an adjacent museum have been completed. The former is a reconstruction of an existing Portugese mosaic now covering pedestrian areas for meeting and gathering. The latter is a parabolic covering, constructed like an airplane wing, that is suspended from a large steel beam that spans 40m across a road to further act as a gateway as well as a canopy. 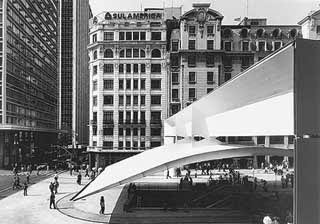 Although the structure required is huge, the canopy receives the most attention, partly to its subtle asymmetry. As a visual terminus to a road perpendicular to the structure (to the left in the above image), the canopy curves to its low point near the ground. This subtle maneuver allows the top of the canopy to have the most presence from the road, especially as the sun illuminates the white surface. 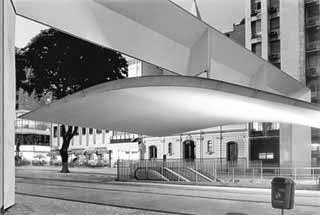 The other side of the canopy is raised higher than the other, indicating the entry to the museum below but also allowing for views to an old church at an angle to the plaza (partially obscured in the image above). As one exits to the plaza the church front is in full view, an important consideration for the architect and the city planners. This gesture, and the altogether low profile of the design, respect the historical fabric while simultaneously looking forward through its simple, gateway structure and elegant canopy.