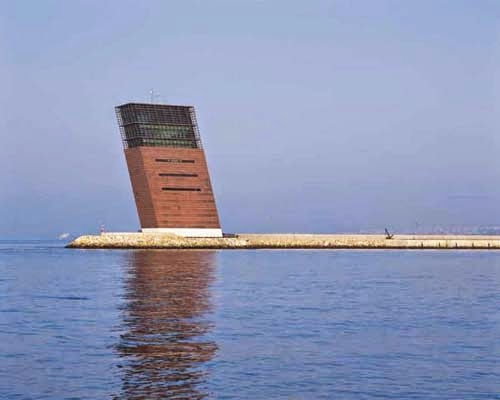 Portuguese architect Gonçalo Sousa Byrne won a competition for the Lisbon Harbor Control Tower in Lisbon, Portugal, completed in 2001. Clad in red, copper sheets, the nine-story tower leans slightly over the water on its man-made cape. The combination of form and material conspire to create a unique object, its silhouette a striking outline against the city behind it and the copper's patina varying due to the inclination of the surfaces. 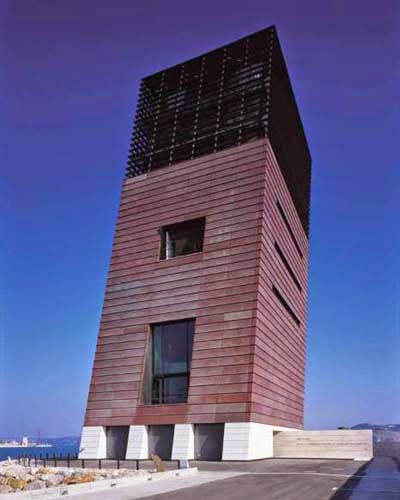 Considered an "active" lighthouse," the building functions beyond a navigational tool; it also contains offices for monitoring and controlling shipping traffic, as well as simulators and seminar rooms to train employees. These work spaces are grouped around a central entry hall over its nine floors. 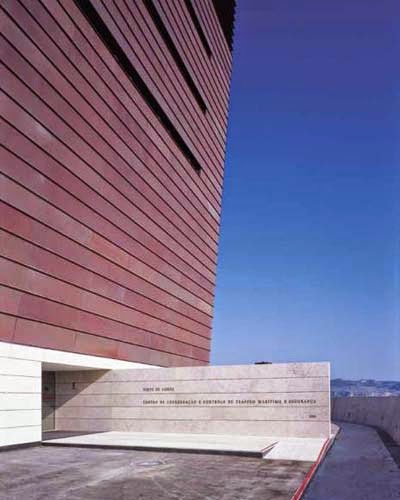 While the leaning form of the control tower sets it apart from typical towers, it does use a tripartite vertical structure, a tradition carried down from Louis Sullivan's high-rise designs in the late 19th century. A light-colored stone defines the first floor and anchors the tower to the ground, a single wall reaching out to indicate the entrance. Above this copper sheets are arranged horizontally using standing seam construction that gives the object a texture from a distance. The top is a glass box behind copper slats, giving the building the image of an abstracted, classical lighthouse. 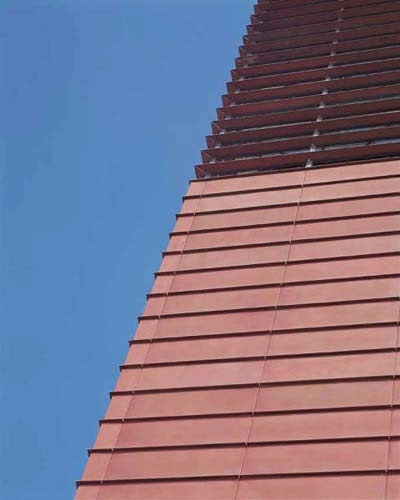 An oxide layer formed immediately after the building's completion. More importantly, "on vertical or sheltered surfaces, the oxide layer develops into an anthracite-brown hue with a matte shine...on inclined surfaces, the protective layer continues to change in color...[developing] into copper's familiar patina green, creating a soft, continually varying play of color on the vertical and inclined facades of the harbor control tower." So as time passes, the variations in its skin will help to make a unique object, beyond its purely formal aspects.
Email Post
Labels: weekly dose