Terminal 2E at Charles-de-Gaulle Airport outside Paris opened on June 25, 2003, at a cost of almost $900 million. 2E was designed by acclaimed architect Paul Andreu, who has created numerous unique airport designs all over the world since Aerogare 1, also at Charles-de-Gaulle, in 1974.

In the image above, Terminal 2E lies in the left and middle foreground, two tunnel-like structures connected by a central passageway. It is "clad in glass, the 650-m-long concourse building is enclosed by a concrete vault, springing from a raised slab, with numerous square window openings...with a flattened ellipse section, the vault spans around 34 meters." Using tried-and-true tunnel construction, the column-free design is "bold, but nothing revolutionary", according to the architect. Reminiscent of other contemporary designs by the likes of Helmut Jahn and Renzo Piano, as well as other air and rail stations in France, it's difficult to see how design and/or engineering could be at fault in the collapse.

Speaking of the collapse, it occurred in a 30m (98') section of the outer (left-hand) building, just beyond the connecting passageway. While many theories have been thrown out in the days after the incident, from design flaws, material inconsistencies, ground-settling, construction delays, to terrorism, nothing will be known for a while, especially with continuing creaks and other noises leading people to entertain the possibility of demolishing the whole terminal. Upon hearing what happened, I was amazed and relieved that only four people lost their lives; at a busier time there may have been more fatalities. 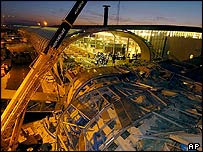 The loss of 2E goes beyond the four lives that were taken in the collapse. The terminal was France's efforts to make Charles-de-Gaulle airport the premier airport in Europe, moving it ahead of London's and Frankfurt's airports. Built for the carrier Air France, the terminal also would have helped make the airline the number one airline in Europe, or at least that was the plan.
Email Post