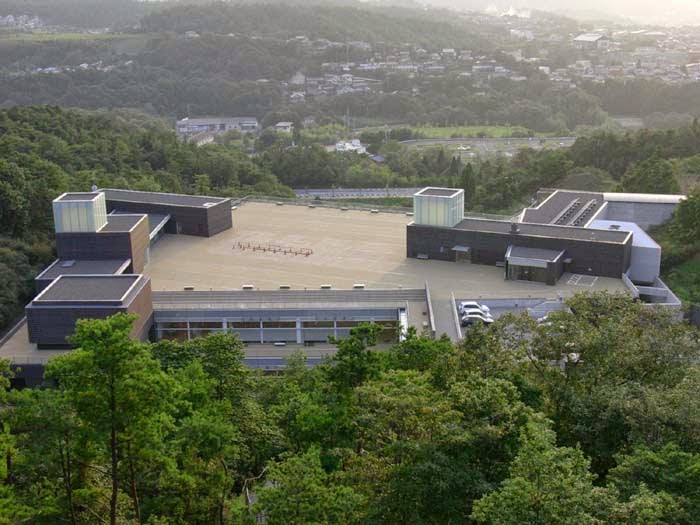 Japan's ceramic tradition crosses over with many of its other traditions: tea, sake (rice), and food, to name a few. The region around Tajimi - in Gifu Prefecture - is one of the most important for clay and ceramics in the country, particularly in the tea ceremony. Ceramics Park MINO is a facility aiding in extending this traditional craft, as well as a place to view ceramic artwork, attend conventions, and experience nature. Comprising the Museum of Modern Ceramic Art, exhibition and convention spaces, a restaurant, a shop and gallery, an atelier, a tea ceremony house, and an observation tower with nature trails, the Ceramics Park is definitely a destination place, its design by Arata Isozaki befitting its programmatic aspirations and beautiful site. 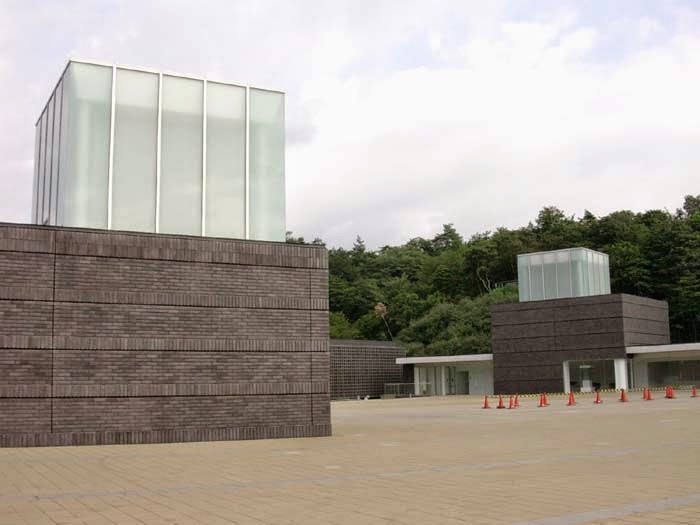 Access to the Ceramics Park from the parking lot is via a footbridge, its concrete ceiling containing shards of broken pottery, a hint at what awaits but also a gesture full of religious and other symbolic connotations. At the end of the long walkway, one reaches the large roof plaza. The visitor is perched above the Museum and the other uses, two light boxes hinting at what lies beneath. Views to the water below and the articulated south facade of the galleries draws one to the main entry (left of the picture at left). 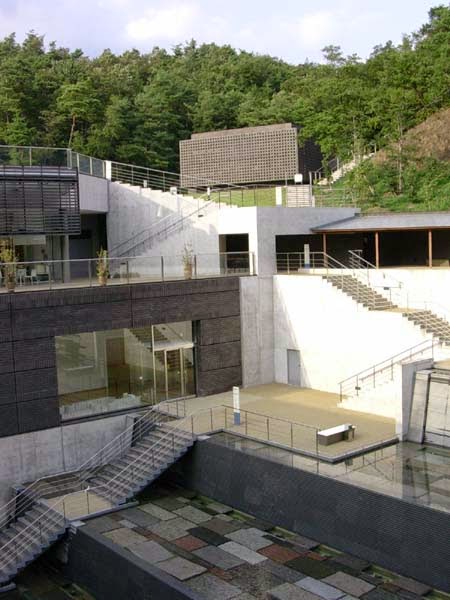 While the roof plaza is a generous space, it is the Cascade plaza that is the heart of the whole composition. Tying together the four levels of the Ceramics Park, the plaza uses stairs to connect the different levels as water trickles down sloping walls to pools lined with different color stone slabs that mimic the variety of clays found in the region. The vertical surfaces that define the plaza vary from light to dark, the former facing south to illuminate that space, while the latter has a variety of treatments, including the ubiquitous tile as well as a waffle-like grid of open cells. 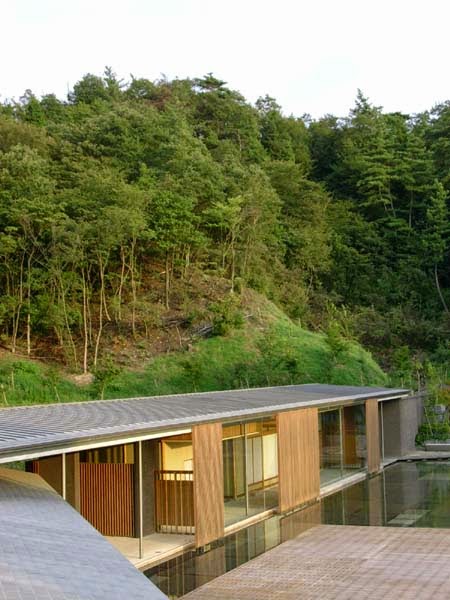 If the Cascade plaza is the heart of the Ceramics Park, then the tea ceremony house is its stomach, the Japanese equivalent of the Western heart. Isozaki restrains himself and creates a traditionally-styled pavilion opposite the rest of the complex. Views towards the teahouse are important, with a dramatic backdrop of trees and other greenery climbing the hillside behind it. In the teahouse, the arts and crafts of the Ceramics Park are put to use, fusing with the tradition of the tea ceremony. Here, two Japanese traditions reverberate together in a beautiful setting that is a perfect synthesis of old and new. 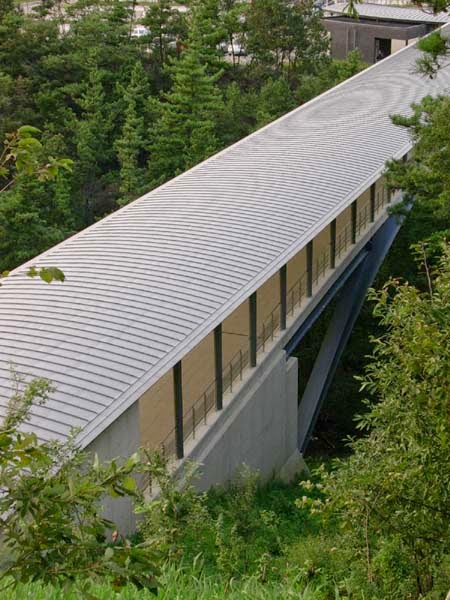 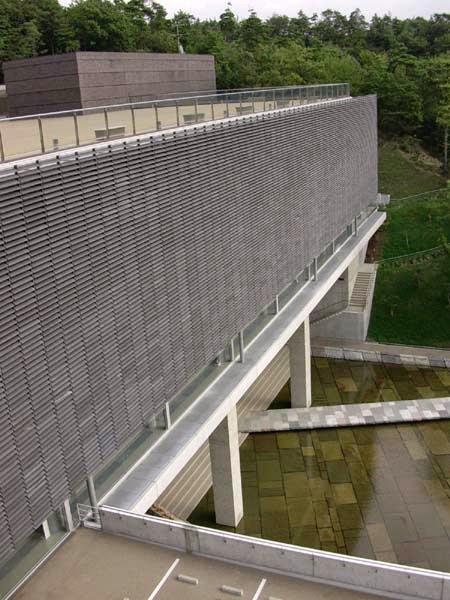 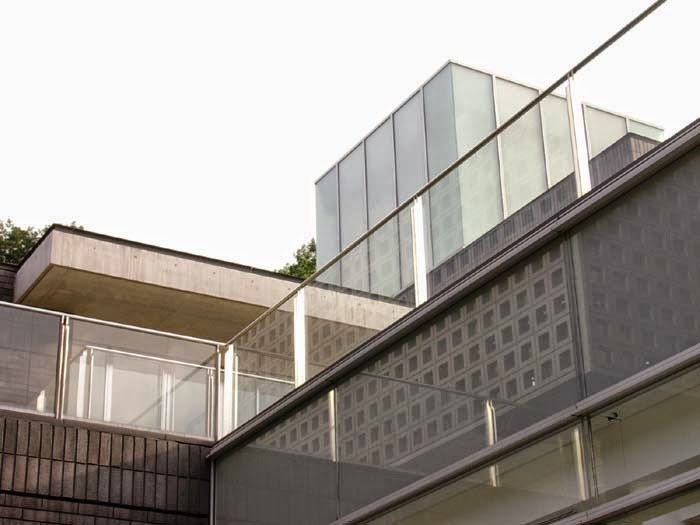 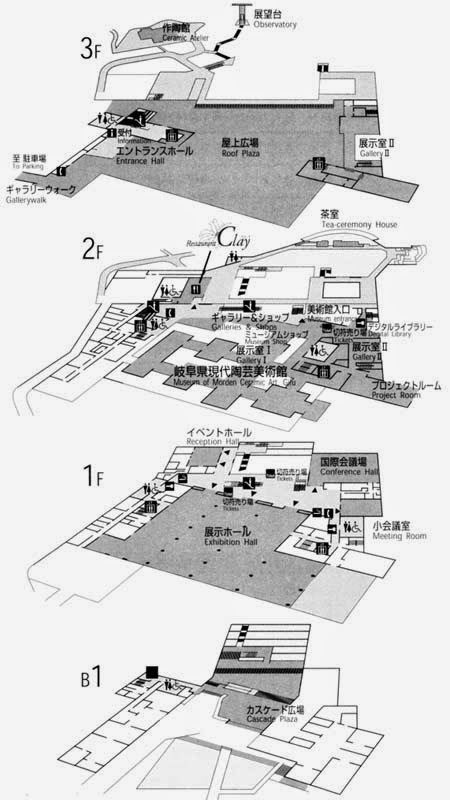