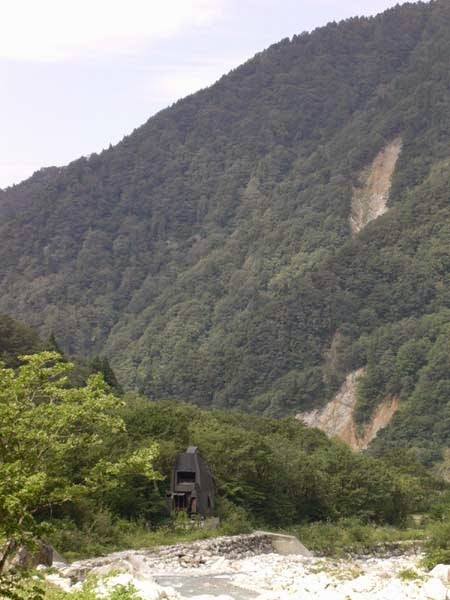 Built as part of Toyama Prefecture's machi no kao (face of the town) series of small projects in the early 1990's, this mountain pavilion (affectionately called Peter House locally) on the Bambajima River is one of only a few built projects by the British architect Peter Salter. Having also designed the Inami Woodcarving Museum as part of the same series, Salter appears to grasp the built character of northern Japan, neither resorting to mimicry nor complete abandon of traditional forms, construction, and materials. Like the Museum, the mountain pavilion is a unique structure that enriches its environment, in this case at a trailhead in the Northern Alps. 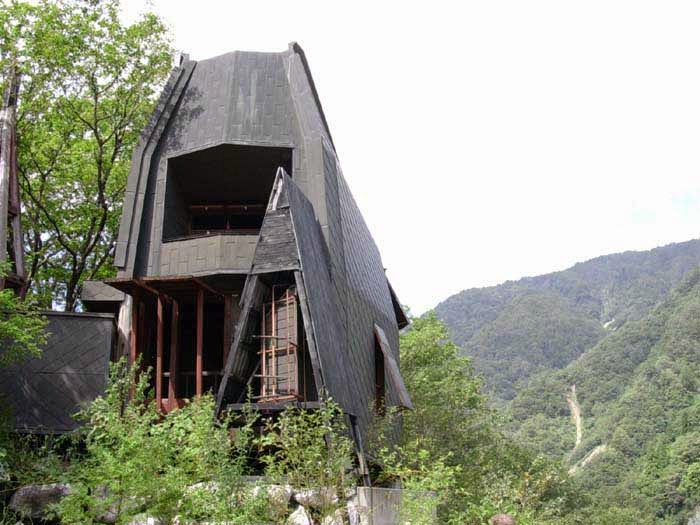 Located near the small town of Kamiichi, the mountain pavilion is reached by winding roads that stretch for about 30 minutes from the nearby town. Once reaching the end of the road, Peter House is hidden behind thick trees on one side and open to the river on the other three sides. The exact purpose of the primarily open-air structure is not apparent at first glance. A deck is its sole outdoor space, though stone steps provide access around and below the pavilion. Inside, stairs lead to a viewing platform that points upstream towards mountain peaks beyond. 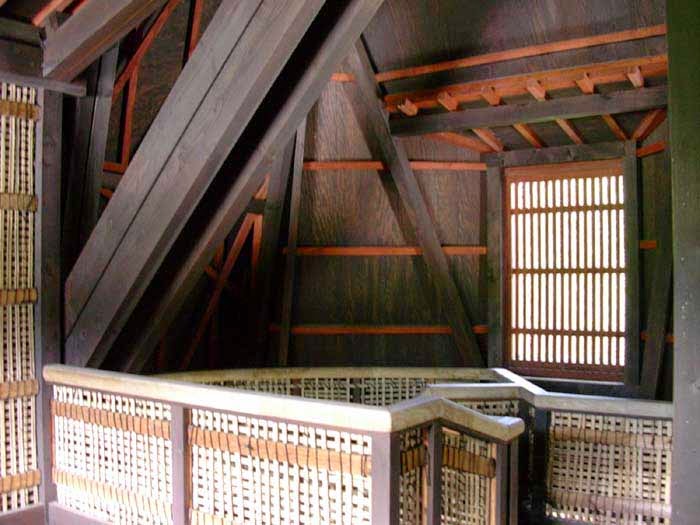 Exterior materials are primarily copper with some wood, while inside wood predominates with bamboo being used for the railing infill. The choice of materials gives the structure a subdued presence in its natural surroundings, even in winter when at times it is completely covered in snow. The intense snowfall in the region was taken into consideration by Salter, who designed the structure so it has an inner and outer shell, the interstitial space intended as a place for mountain creatures to make nests. Also, an intricate system of pipes slows water runoff so the melted snowfall would be visible in the warm months as drips of water from exterior pipes. On a recent visit, the previous night's rainfall was still evident in the structure's drainage. 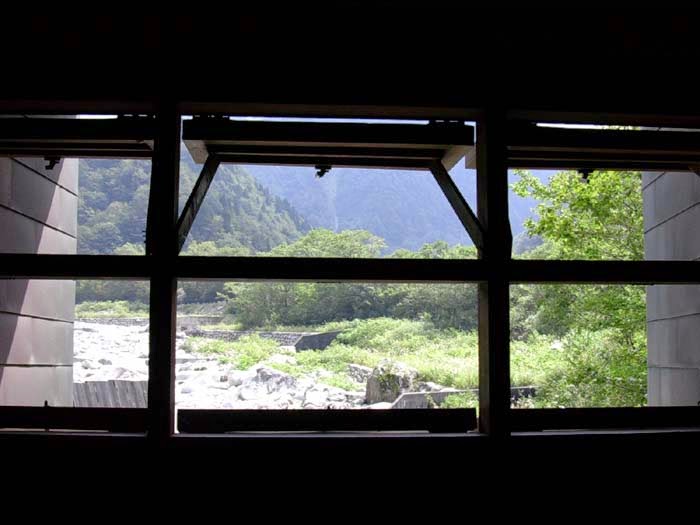 Easily the most impressive aspect of the pavilion is its surroundings, made evident by the views that it frames. Thankfully, Salter designed a building that harmonizes with nature while straddling the line between contemporary and traditional, its form being an artistic response but also resembling a Japanese warrior helmet. Since its completion in 1994, a shed roof has been added above the exterior drain pipes (evident in second image), perhaps to protect the intricate workings from the heavy snow. At first the addition was a bit disconcerting, but after a while it was apparent that Salter's original design is such that slight changes don't affect its overall appearance and quality, whereas a Modernist solution would appear violated. 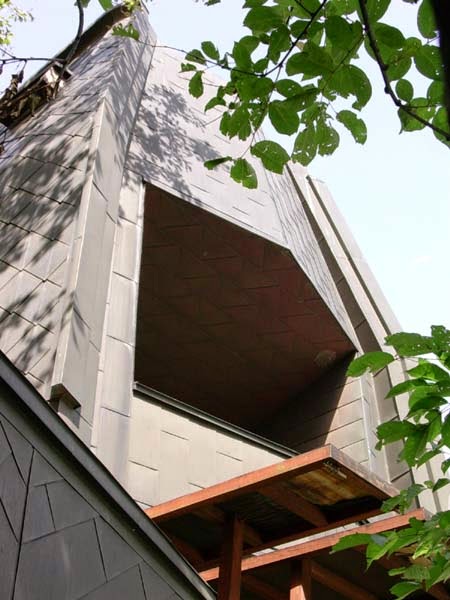 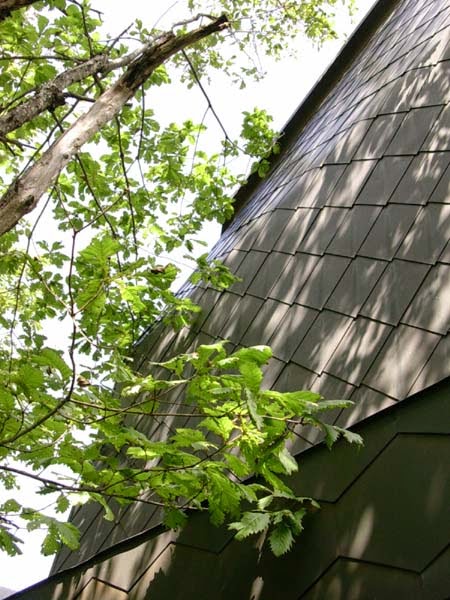 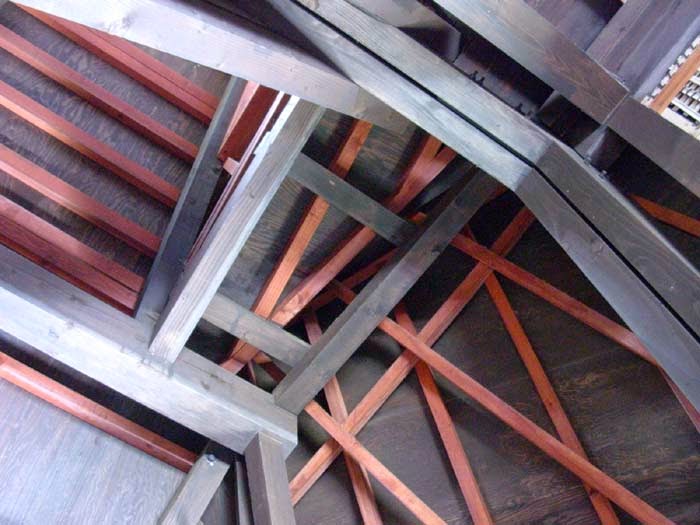 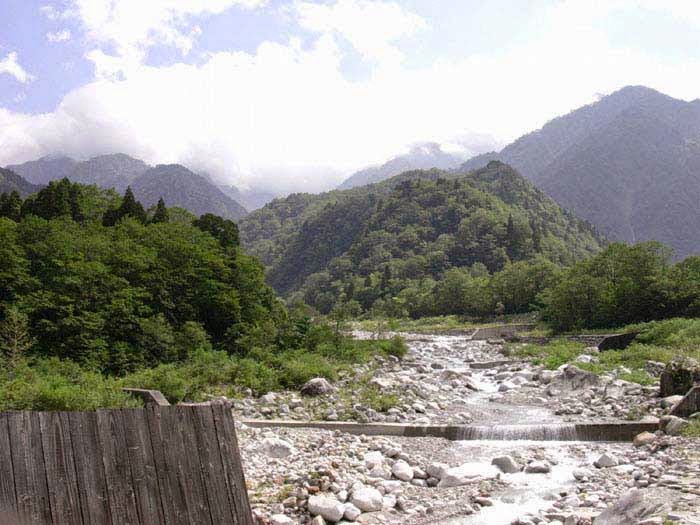 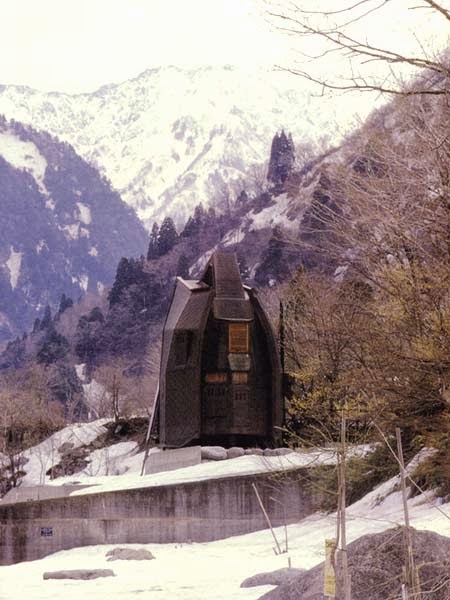