In John Updike's "Critic At Large" review in The New Yorker on the MOMA expansion by Japanese architect Yoshio Taniguchi (one of two featured in the magazine before the museum's November 20 reopening), comes this second-hand quote by the architect:


Raise a lot of money for me, I’ll give you good architecture. Raise even more money, I’ll make the architecture disappear.


After experiencing Taniguchi's Gallery of Horyuji Treasures in Tokyo I realize this is not much of an overstatement. While Updike is referring to "floating" wall effect achieved via a dark band at the top of bottom of each interior wall, at Horyuji Treasures he melds the architecture with the display of objects so seamlessly that they are one and the same. The main gallery includes two square columns in flawless concrete that set up a grid of 26 wood and glass display cases, the same square dimension as the columns. The columns ground the encased sculptures, which would otherwise be floating in the rectangular room. 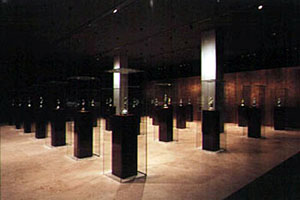 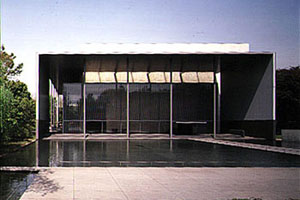 Gallery of Horyuji Treasures, inside and outside

Granted that the curatorial differences between Horyuji and MOMA are different - the former a set, permanent exhibition, the latter a mix of permanent and temporary exhibits - Taniguchi's expert minimalism seems appropriate for both. In the case of MOMA, as Paul Goldberger attests in the second review, his architecture extends the existing "Modernism" of its multi-expanded mid-Manhattan home but also knows what needs to change, specifically its urban relationship.

Each article praises the non-linear arrangement of the galleries, the grand atrium space, and the entry that now links 53rd and 54th Streets. Of course, each has their criticisms but reading them it's the differences in writing style that come across. Goldberger, a seasoned architectural critic, is as thoughtful, clear and insightful as always, though compared to John "Rabbit" Updike, Goldberger is a bit dry and too...straightforward. But that's inevitable when one's compared to a literary figure like Updike. Ultimately Updike offers a unique history of MOMA (esp. vs. the Met) and a unique take on its present and future. Recommended reading.

Update 11.15: Nicolai Ouroussof weighs in on the expansion in The New York Times. Includes an audio slide show.

Update 11.16: Curbed posts some reactions to MOMA's expansion, both from the usual news sources and the blogsphere, including images from the opening by eugonline.
Email Post