A Reality Dose on the Prairie

The word “Kansas” typically calls to mind miles and miles of flat farmland, grain elevators, tornadoes, and The Wizard of Oz, not cutting-edge architecture. During the five-and-a-half years I spent in Kansas, these stereotypes were sadly reinforced. That is, until one fateful college architecture field trip to Kansas City, when my expectations about the Sunflower State’s built environment were quickly and thankfully shattered for good.

Stopping off in Lawrence, home of the University of Kansas (KU), our undergraduate class turned a corner and headed into yet another unremarkable block of tract houses where we encountered an alien entity; a house with poured-in-place concrete walls below corrugated metal siding, a butterfly roof (the inverse of the typical ranch-style gable roof), and an elaborate sheet metal scupper above and between the two garage doors fronting the house. What is it, we all wondered? Who did that?

Even more remarkable than the unconventional form and materials of the house, we learned that the architect had not only designed the house, but had built it himself. From the concrete walls to the kitchen sink (literally), almost everything had been built from scratch by bending, cutting, shaping, and modifying materials, fashioning something completely new and different than the off-the-shelf components ubiquitous in houses across America. Regardless of the house’s unconventional form and construction, all the parts in the “butterfly house” (later I found out it was the Shinmomura/Davidson-Hues House, built for a KU art professor and his artist wife and completed in 1994) happen for good reasons, they are not arbitrary: the concrete walls insulate the house; the inverted roof pushes clerestory windows higher than a typical pitched roof creating tall spaces with natural light flowing from overhead; and the elaborate scupper above the garage doors also functions as a garage door opener, allowing the doors to lift without entering the studio space while draining water to the center of the driveway through the custom gutter that expresses the movement of water from sky to land. It is a functional, inexpensive, and one-of-a-kind house and studio that became my introduction to Dan Rockhill, a professor in KU’s School of Architecture and Urban Design. 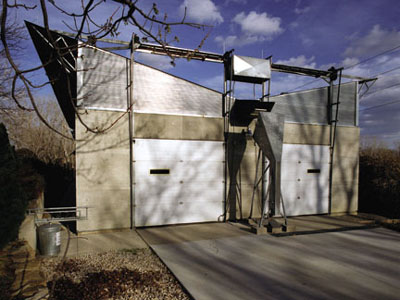 Years later, after graduating and moving back to Chicago, I attended a lecture by Dan Rockhill at the Graham Foundation. Remembering the “alien” house with the butterfly roof, I looked forward to revisiting that Kansas experience. Since that house, Rockhill and Associates—comprised of Rockhill and partner David Sain—have designed and built ten more houses, each with their own hands, each an improvement on the previous one, each with a stronger connection to the land and the surroundings. Rockhill went on to speak about Studio 804, the graduate-level studio he teaches at KU where students collaboratively design and build a single-family house, typically for a low-income family, during their final semester. He fumed about the conservative tastes of the residents of Lawrence, a contradiction to their seemingly more liberal mindsets, recalling that shortly after the construction of the butterfly house, somebody spray-painted on the concrete walls, “Paint this or I will.”

The difficulties Rockhill has had to overcome with his clients and the community around him are a product of his deliberate construction methods—ultimately slower and costlier than traditional means—and his faith in cutting-edge architecture as much as they are a product of the neo-traditional tastes of Kansans. “Few people in Lawrence like modern architecture,” says Rockhill, “but I can’t make architecture here with conventional means, so I do what I call ‘design-build extreme.’” Design-build is an increasingly popular method where the architect works with the contractor during the design phase, as opposed to a design-bid-build method where the contractor is hired after the completion of the architect’s design documents. Rockhill truly does take design-build to an extreme, acting as the architect and the contractor, a situation with unprecedented and unequaled quality control that many architects envy but which Rockhill doesn’t recommend. “I try to enable my students to understand how to do good work, giving them great learning experiences,” Rockhill explains. “But I don’t train them to do what I do.”

Both Rockhill and Associates and Studio 804 recently completed two single-family houses in the summer of 2004. Rockhill and Associates’ project is called the Kansas Longhouse, a speculative house halfway between Lawrence and Topeka on land given to the architect as payment for a restoration project, while the Studio 804 house is called Modular 1, a prefabricated house built offsite and shipped in five separate pieces to an urban site in Kansas City, MO. 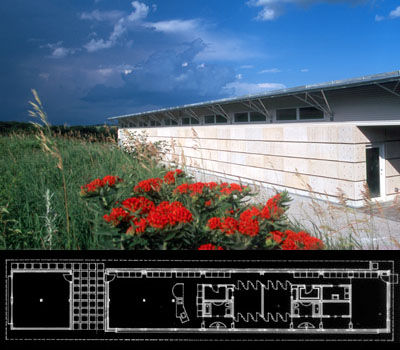 The Kansas Longhouse is a beauty, sited on a roughly eight-acre parcel covered with prairie grass and situated close to a creek and lake. The approach to the house is via a long driveway elevated above the height of the roof, which is covered in sod to “make the house hard to see, so that it melts into the landscape,” Rockhill says, while also providing thermal protection for the one-story interior. Along the length of the Longhouse from the west, a semi-detached garage leads to a covered patio/mud room followed by the main entry, living area, and open kitchen. Beyond the kitchen are the core rooms (bathrooms, mechanical, storage, and laundry) that are detached from the exterior walls and separated by a flexible zone that can become two bedrooms, one large studio, or whatever is needed, all in a matter of minutes. At the east end is the master bedroom that provides additional access to the outside.

Materials inside the house are a mixture of warm and cold in an effort to create a compromise between Rockhill’s more industrial sensibility and what will actually sell. He explains, “Since this was a spec house without a client, the design is less risky, blending birch wood walls [defining the core areas] and IKEA kitchen cabinets with polished concrete floors.” The last element, with radiant heat underneath, are echoed in the handmade, concrete countertops. The all-glass south wall warms the house in the winter, with louvers and roof overhangs providing shade in the summer. Clerestory windows above cabinets on the north wall allow for cross ventilation, while the solid wall below provides for thermal mass, like the roof above. On the outside, the house is faced with local limestone, rooting the house in the landscape.

As mentioned, the Kansas Longhouse was made as a speculative house without a client, though it was recently sold to an individual, covering Rockhill’s costs and allowing him to move onto another project. “With that house we didn’t have a fee,” Rockhill says, “and we just broke even because the house was appraised strictly on square footage—like comparably sized junk out in the country, which it isn’t.”

Likewise, the Studio 804 students designed their house, Modular 1, without a client. But unlike the Longhouse, Modular 1 had a target market, the “hip, young, urban couple buying their first house,” as described by Rockhill. Again the design was a success, selling immediately after completion to just such a couple.

Built in a Lawrence warehouse then deconstructed before shipping to its site for assembly, Modular 1 uses prefabricated design as a means to create affordable housing. Certainly not a new idea, prefab is enjoying a renewed hipness as architects attempt to spread modern architecture to the masses. Websites such as www.fabprefab.com sell prefab houses, design magazines hold prefab competitions, and now people can finally own architect-designed houses without spending a fortune. 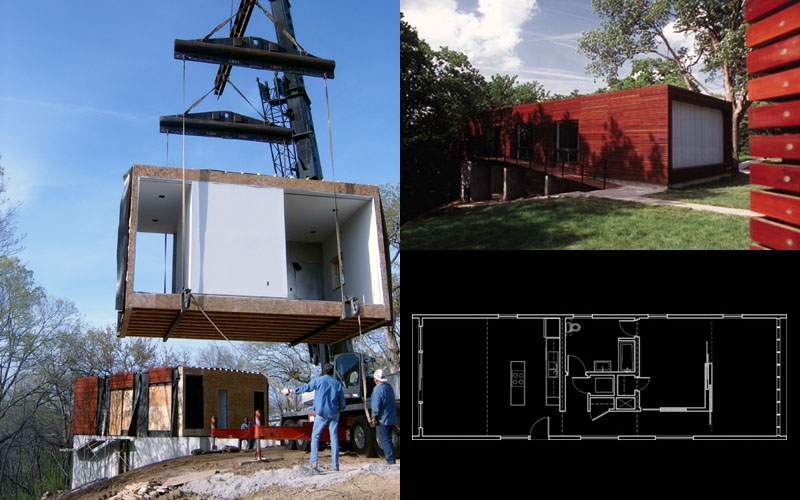 In plan, Modular 1 resembles a shotgun house—so named because a shotgun burst could be fired at the front of the house, travel along the house’s corridor, and then subsequently exit in the rear—with two bedrooms, a utility/laundry/bathroom area, a kitchen, and a living area roughly defined by the five modular pieces of which the house is made. A corridor traverses the length of the house on one side, with each piece—outside of the ends—interchangeable to allow for personal configuration before being assembled onsite. The simple plan of 1,200 square feet is a wood frame construction with high-value insulation, energy-efficient windows, and an environmentally approved Brazilian hardwood exterior made of tightly spaced, thinly cut horizontal slats. This last detail gives the house its greatest expression and its greatest potential, as different woods suitable to exterior application could be used if the Modular 1 is franchised and shipped throughout the country, giving each house a site-specific character.

Inspired by the industrial vernacular of Kansas—the railcars, grain elevators, silos, and farm equipment—Rockhill is making architecture that is of Kansas, not just in Kansas. Both the Kansas Longhouse and Modular 1 continue Rockhill’s unconventional architecture through handmade means, though each house points to a direction that may allow his architecture to find greater acceptance, sustainable regionalism and prefabrication respectively.
Email Post