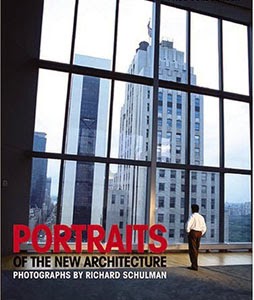 Richard Schulman's color photographs highlight fifty international architects and their buildings. In some ways a product - and critique - of the celebrity status of architects, the candid images of each (mainly individuals but sometimes firms) are the most illuminating aspect of the book. Mainly taken in offices and homes, the portraits don't have a stylistic theme, instead finding their inspiration in the architects themselves. For example, Rem Koolhaas is the only focused head among a sea of blurry OMA-ers - exhibiting the teamwork of his practice - and Daniel Libeskind sits on an office chair in a loft populated only by crates and boxes - a clue to his transient nature. The one consistency in the portraits is Schulman's use of light, the strongest element in each photograph. The only distracting part of the book is its geographical bias. Schulman admits in his introduction that picking the final fifty was difficult, though looking at the list of architects the crosshairs are pointed at New York City. Twenty-one of the fifty architects are based in NYC, half of the fifty located in the Northeastern states. The rest are spread across Europe, Japan, Mexico and the other US coast, with exceptions like Miami's Arquitectonica and New Mexico's Antoine Predock. Unfortunately no representatives from the Midwestern states are present, nor is Africa, South America, or the rest of Asia included. But this isn't necessarily a detraction of the book, as it is an indication of where the most popular and cutting-edge architecture is being produced. Perhaps this is a book that can be updated in ten years or so, as an architectural barometer showing the profession's cultural and geographical evolution.