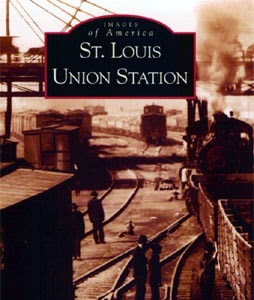 Part of the "Images of America" series already featured on this page, this book illustrates the detail the series enables. Whereas other books have looked at whole cities, here the focus is on St. Louis's Union Station, not only as a building but also as a symbol of the Midwestern city's evolution last century. Tracing its history from the Old St. Louis Union Depot to the buildings current use as an indoor mall and hotel, black and white images tell its story. Local architect Theodore Link won a competition in the late 19th century, basing his design of the station on a walled town in France. To this day, the rusticated stone exterior and prominent tower have a strong presence in downtown St. Louis, its elaborate interior on par with big city stations like Grand Central Terminal. The rise of the automobile and aviation traffic could have been the end of Union Station, but a $150 million restoration in the 1980's returned the building to its former glory, even though the functions inside are different. Interestingly, a hotel has long been the structure's one consistency over the years, serving travelers traversing America in the early years and now serving tourists visiting the "Gateway to the West."