Over at MSNBC, David "Hardblogger" Shuster is hardblogging up a storm about Lower Manhattan's controversial Freedom Tower. But more importantly he's pushing the alternative of rebuilding the Twin Towers, a questionable act in this "softblogger's" opinion.

His first post criticizes the design and engineering of the Freedom Tower, basically saying that the design isn't something to be proud of, and that it does not send the proper message to those who want to terrorize and scare our nation. He also insinuates that the monetary ties of the Lauder family (heirs of Estee Lauder's cosmetics fortune) to New York governor George Pataki played a deciding role in Libeskind's selection for the WTC site's master plan, since the architect is a friend of the family, after all.

In his next post Shuster tells us there is an evident lack of pride and confidence in the Freedom Tower design, and he proposes the only (in his mind, apparently) alternative: rebuild the Twin Towers "slightly off-set from where the old ones stood." A vote is put to the readers to choose between "America's Freedom Tower" and "A new Twin Towers."

His most recent post from last Friday indicates that 80% of the 3,483 respondents to the poll voted for the Twin Towers to be rebuilt, "stronger and mightier than ever." To Shuster, the reality is that Americans want the Twin Towers to "rise again." 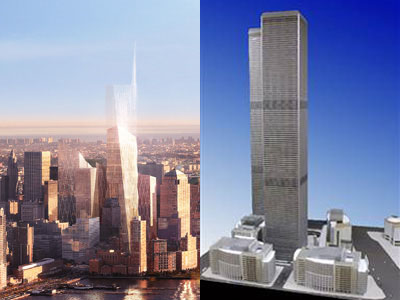 SOM's Freedom Tower montaged with the rest of the master plan in Lower Manhattan is on the left; a replica of the Twin Towers is on the right.

The desire to rebuild has been in evidence since September 12, 2001, but Shuster appears to be going beyond his journalistic limits into activism, under the guise of exposing the "truth" behind Libeskind's selection. Granted that many people don't like Freedom Tower and its surrounding master plan, but here's what I think is wrong with Shuster's argument and tactics:

But I'm not writing all this because I like the Freedom Tower design (I don't) or hate the Twin Towers (I always like the space in-between each tower and the way they anchored Manhattan on the skyline), but because I think the whole rebuilding (the site, not the Twin Towers) process needs to be open to many alternatives, not just the either/or situation Shuster poses, a proposition as dire as Bush's "you're either with us or against us."

Update 03.13: Deroy Murdock, at the National Review Online, pushes for a reconstruction of the Twin Towers (via Archinect).
Email Post